Digital music gets a cubist makeover

An eight-inch wooden cube may be an unlikely spark for a musical revolution – but that’s the hope of a collaboration of electronic engineers at Queen Mary University of London and musicians working towards hackable electronic instruments that performers can easily modify to produce sounds in surprising new ways. 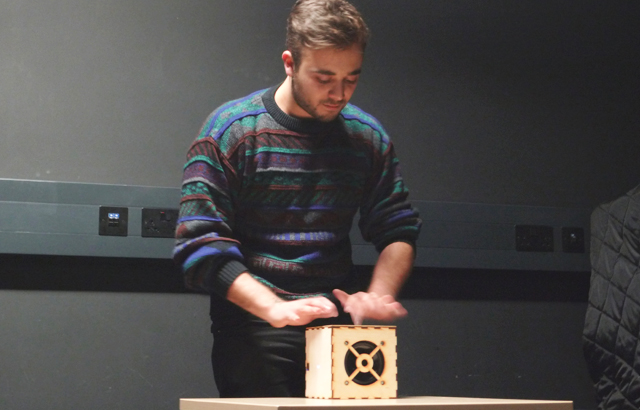 The deliberately simple cube, which contains a sensor, computer chip and speaker to transform touch into sound, is the creation of Dr Andrew McPherson, who works on ‘hackable instruments’ at the Centre for Digital Music at Queen Mary’s School of Electronic Engineering and Computer Science.

In previous projects, Dr McPherson has focused on re-engineering instruments that required years of training, such as the keyboard. In contrast, the cube is deliberately designed to be simple, encouraging performers to discover unusual playing techniques such as tapping, brushing and rubbing, unlocking their creativity and showing what can be achieved when there are no preconceptions about playing styles.

The cube’s capabilities were put to the test at an informal concert at Queen Mary at the end of January.

Ten volunteers – including classically trained musicians and electronic music hackers – have found a remarkable range of ways of playing the cube, producing drones, bursts of noise and percussive rhythms.

“Everybody noticed that this is a really simple instrument. But then they really engaged with it, and after just one week they understood this is simple but there’s much more inside.”

One, classical guitarist Michael Poll, leapt at the opportunity to take part. “It sounded fantastic,” he said. “I had full faith it would be something cool. In some ways, the box is a musician’s dream, as a blank palette. My only fear is my ideas might be too conservative for the project.”

A second participant rested bells on the speaker to add a rattling sound. Another even licked the sensor: the spittle left behind generating a continuous tone, leaving his fingers free to rap out complex rhythms.

“Hacking instruments is not in itself new,” says Dr McPherson. “Traditional instruments have long been used in innovative ways the designer did not anticipate. Distortion on the electric guitar was an engineering limitation before it became the sound of rock and roll; and the turntable was a home playback device before it became a creative tool in the hands of DJs. We want to explore how encouraging that same spirit of adventure can transform digital instrument design.”

Weird and sophisticated instruments harnessing digital technology are already emerging worldwide, such as roll-up keyboards made of silicon and the UK-developed Eigenharp.

Queen Mary’s cube is a digital instrument deliberately intended to be so basic that it forces the musicians to invent their own approach to using it. The key goal is to improve instrument designers’ awareness of how people often use musical instruments in unexpected ways, and so to help ensure that new instruments facilitate rather than constrain self-expression.

The ultimate aim of the project is to develop digital instruments that not only support the development of distinctive personal playing styles, but can also be physically modified by the performer in order to produce new tones and textures.

Dr McPherson says: “We want to demonstrate the value of studying user reactions to new technology, especially any unusual and idiosyncratic uses that may emerge. We’re

also developing open-source hardware and software that will help musicians to customise digital instruments and build their own from scratch, without having to be an IT or engineering expert.”

Instruments inspired and enabled by the project will be showcased at a special public performance at Queen Mary in the autumn.

The 15-month project ‘Hackable Instruments: Musical Interface Design for Appropriation, Modification and Creative Destruction’ runs until December 2014 and is receiving a total of £98,000 in EPSRC funding.

Innovation in music technology at QMUL is supported by the EPSRC through the Centre for Digital Music and a Doctoral Training Centre in Digital Music and Media for the Creative Economy, with funding of around £7 million.