QMUL conference marks the outbreak of the First World War

An international conference, marking 100 years since the outbreak of the First World War, was held at Queen Mary University of London (QMUL) on 1-4 August. 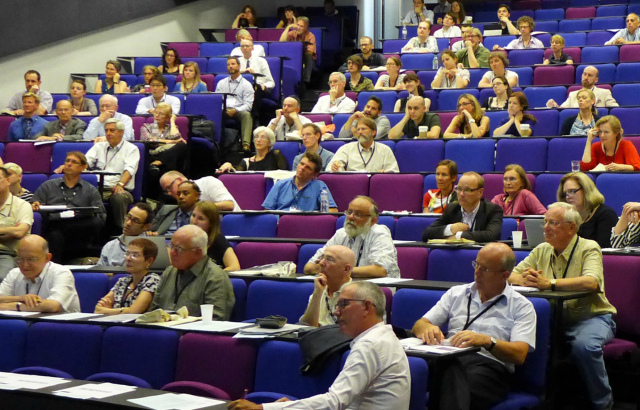 International delegates at the World War One Conference

The conference, entitled Perspectives on the Great War, included reflections on the tragic human cost of the conflict, and was designed to highlight the interdisciplinary and international nature of First World War scholarship.

In welcoming the delegates, Professor Simon Gaskell, Principal and President of Queen Mary University of London, said: “Within our own University, and indeed within education more generally, there has always been an imperative to reflect upon the perspectives and lessons of war; not least the perspectives which carry over into the subsequent peace.”

The programme reflected the scale of the organisers’ ambition, with more than 100 presentations from global experts across a range of disciplines, including politics, languages, colonialism, art, and military history.

Commenting on the diverse agenda, Professor Felicity Rash, from QMUL’s School of Languages, Linguistics and Film, said, “The range of issues discussed bears testimony to the War’s global reach, and the vast effect on human lives and physical landscapes. While all of us are acutely aware of the devastation wrought by this dark period in world history, it is our profound hope that our assembly will also serve as a landmark of scholarly collaboration, commemoration, and world-wide friendship.”

Commenting on her address, entitled ‘Art at War: the European Avant-Garde and World War One’, Professor Adamowicz said, “It explored not only the theme of war - art about war or art against war, but also experimentation with new forms – art at war with artistic tradition. It focused on the ways in which various avant-garde movements sought to translate and transpose war-time and post-war experiences.”

Professor Adamowicz’s lecture included a visual and descriptive overview of works by Expressionists, Cubists, and Futurists, and explored the production of Zurich and Berlin Dadaists.

The conference was organised as a collaboration between QMUL’s School of History, School of Languages, Linguistics and Film, and the Centre for Anglo-German Cultural Relations. The organisers are grateful for the assistance and support of their conference partners, including the Leo Baeck Institute (London), the German Historical Institute (London), the Open University, and the German Department of University College London, and the Embassy of the Federal Republic of Germany, London.

The event marks the first in a series of academic, research and public engagement events that will take place at QMUL during the commemorative period, which runs to 2019. For more information, visit the QMUL World War One microsite.