International team of scientists explore the secrets of Saturn's rings

An international team of scientists have studied the intricate characteristics of Saturn’s mysterious rings in never-before-seen detail, it has been revealed in a paper published today. 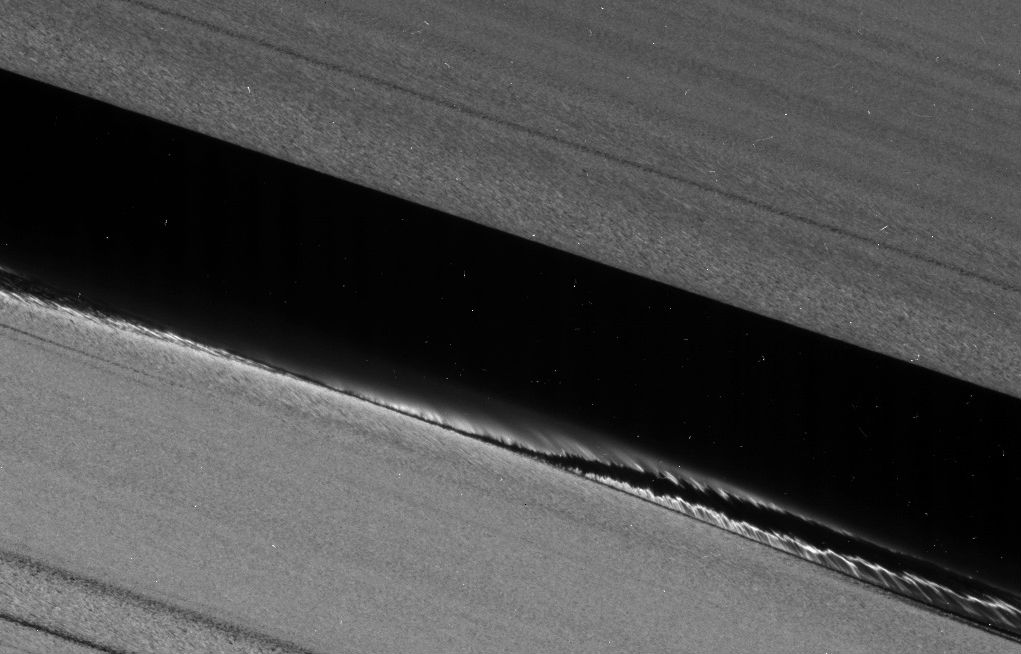 A false-color image mosaic shows Daphnis, one of Saturn's ring-embedded moons, and the waves it kicks up in the Keeler gap. Images collected by Cassini's close orbits in 2017 are offering new insight into the complex workings of the rings. Image Credit: NASA/JPL-Caltech/Space Science Institute

The new paper, written by a team including STFC-funded scientists Professor Carl Murray and Dr Nick Cooper from Queen Mary University of London, describes results taken from the Cassini-Huygens mission and is the closest-ever observation of the main rings.

Cassini launched in 1997 on a quest to orbit Saturn to find out more about the planet, its moons and rings. The spacecraft took its final dive onto the surface of the planet in 2017, but the data collected from the mission is still being harvested and analysed, and new findings are still being discovered.

The data for this paper was gathered during the Ring Grazing Orbits (December 2016 to April 2017) and the Grand Finale (April to September 2017), when Cassini flew just above Saturn's cloud tops.

'Cassini continued to surprise us right to the very end'

For the first time, scientists could pick out fine details of the rings and the moons within them, such as unusual patterns and textures that raised questions about how they formed.

“These new results show how Cassini continued to surprise us right to the very end. The close-up views have helped us to resolve previously unseen structures in the rings as well as provide even more mysteries to solve,” said co-author Professor Murray.

In the paper, the team show that the tiny moons embedded in Saturn's rings (named A through G, in order of their discovery) can tell us more about how our Solar System was first created. This is because Saturn’s moons interact with the particles around them in the same way that you would see new planets form – from the spinning dust and gas of a collapsing cloud.

The observations also deepen scientists’ understanding of the complex Saturn system. Scientists conclude that at the outer edge of the main rings, a series of similar streaks in the F ring have the same length and orientation, showing that they were likely caused by a flock of impactors that all struck the ring at the same time.

Professor Murray explains: “Saturn’s F ring has always been enigmatic with its bizarre, twisted appearance and bewildering array of features. Capturing images of the trails left by a synchronized stream of impactors as they hit the ring’s core has given us a unique insight into the processes that have shaped the ring.

“We think that the ‘formation flying’ impactors are the pieces of a moonlet that was orbiting close to the F ring and was disrupted by the gravitational effect of the nearby moon, Prometheus, as they passed one another. Our research at Queen Mary has shown that Prometheus could also be involved in the formation of such moonlets – as Prometheus passes by its gravity can trigger ring particles to coalesce forming potential new objects. Therefore, Prometheus can create as well as destroy.“The whole F ring region is fascinating to study because it lies right at the boundary where there is a balance between the gravitational force of attraction trying to bring particles together and the tidal forces trying to tear them apart. Understanding these processes in detail will help us to understand how planets form and interact with surrounding material.”

As well as providing new insight, the research also poses new questions. The close-up images of the rings brought into focus three distinct textures appearing in belts — clumpy, smooth and streaky. But in many places the belts aren't connected to any ring characteristics that scientists have yet identified.

“This tells us the way the rings look is not just a function of how much material there is," said lead author and Cassini scientist Matt Tiscareno of the SETI Institute in Mountain View, California. “There has to be something different about the characteristics of the particles, perhaps affecting what happens when two ring particles collide and bounce off each other. And we don't yet know what it is.”

NASA revealed that the next phase of Cassini science will be to build new, detailed models of ring evolution – including the new revelation from Cassini data that the rings are much younger than Saturn.