Data from the European Space Agency’s Cluster mission has provided a recording of the eerie ‘song’ that Earth sings when it is hit by a solar storm. 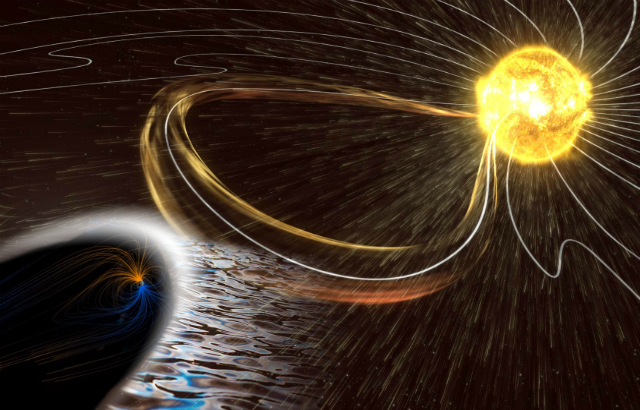 The study, published in the journal Geophysical Research Letters, analysed waves generated just outside the Earth’s magnetic field during a specific type of solar storm, known as a magnetic cloud.

The complex noises of solar storms were brought to life by Queen Mary physicist Dr Martin Archer who transformed the frequency of the recorded magnetic waves into audible signals.

As part of their orbits, the Cluster spacecrafts repeatedly fly through the foreshock, which is the first region of space the particles of a solar storm encounter as it hits our planet’s magnetic field.

The new analysis shows that, during the collision, the foreshock is driven to release magnetic waves that are much more complex than first thought.

When the frequency of these magnetic waves are converted into audible signals, they give rise to a strange song.

“We expected that the frequency of the sounds would be higher in a solar storm, but we didn’t expect was that they also become far more complicated.

“When no solar storm is striking Earth, the sounds are present but they are lower pitch and only one single frequency dominates. During a solar storm though, the frequency of the wave can double and we see lots of different frequencies going off at the same time.

“The result is a song that ends up sounding a bit like canaries, something I realised as we recently presented the findings in the Canary Islands.”

Solar storms are a part of space weather. While the solar wind is always blowing, explosive releases of energy close to the Sun’s surface generate turbulence and gusts that eventually give rise to solar storms.

Due to the potentially damaging effects solar storms can have on sensitive electronics and technology on ground and in space, understanding space weather has become increasingly important to society.

As magnetic fields are ubiquitous, the complex interactions in the earth’s foreshock observed in this study could also take place in a variety of other cosmic environments and have wider implications for our understanding of the universe.

Philippe Escoubet, European Space Agency Project Scientist for Cluster, said: “This is an excellent example of how Cluster continues to extend our knowledge of the Sun-Earth connection, even years after the original data was obtained.”