Queen Mary’s Faculty of Humanities and Social Sciences has invested in several new strategic lectureships. Over the past few weeks we featured some of our new recruits and showcased their research. 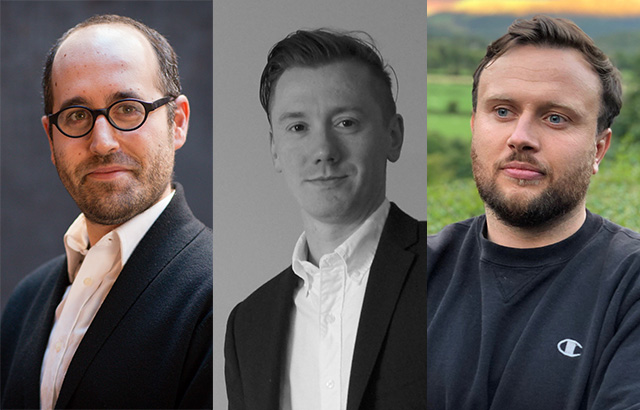 Daniel Lee, Andy Willimott and Will Bowers will join Queen Mary in September 2019.

Queen Mary University of London is one of the UK’s leading global universities, highly rated for its teaching and learning, research and innovation, and wide-ranging public engagement.

The Humanities and Social Sciences have been key to establishing Queen Mary’s global reputation and the Faculty Schools regularly appear in subject rankings of the top 50 universities in the world.

In the fifth part of our feature series, we introduce a further three of our academics who will be joining us in September 2019. You can read previous week’s stories here.

Dr Daniel Lee is a historian of the Second World War with a particular interest in France and North Africa. He completed a Master of Studies and a Doctor of Philosophy at the University of Oxford. His first monograph, Pétain’s Jewish Children: French Jewish Youth and the Vichy Regime, 1940–1942 was published by Oxford University Press.

Dr Lee held postdoctoral fellowships at the European University Institute (Max Weber Fellow), Yad Vashem and the United States Holocaust Memorial Museum. He is currently working on two projects: one on the Jews of Tunisia during the Second World War and a second on the life of a low-ranking German Schutzstaffel Officer whose personal papers were discovered recently inside an armchair. His research explores the coexistence between young French Jews and the Vichy regime. Daniel is also a BBC Radio 3 New Generation Thinker.

Dr Lee said: "I am looking forward to joining one of the most exciting history departments in the country. More broadly, I can’t wait to join a university that is home to some of the most influential research institutes anywhere in the world, that aims to tackle some of society’s most pressing global challenges. Finally, I am also proud to be joining a university that values and lives inclusivity and diversity."

Dr Andy Willimott is a historian of modern Russia and the Soviet Union with a particular interest in the formation and popular experience of revolution, radical ideology, and utopian models, as well as European and Global History. His multi-award winning book Living the Revolution: Urban Communes & Soviet Socialism, 1917-1932 won the Alexander Novel Book Prize.

Dr Willimott’s research interests include investigating the influence of the community-based blueprints for socialism and the religious, political, and experimental communes with which socialist utopianism was historically intertwined.

Dr Andy Willimott said: “I am honoured to be taking up a post at Queen Mary. I am excited about the prospects of working with, and learning from, the many world-leading scholars based at the university.

“One of the reasons I applied for the job was the rich opportunity for interdisciplinary collaboration, drawing together expertise from across the Faculty of Humanities and Social Sciences. And I am also looking forward to working with Queen Mary’s dynamic undergraduate and postgraduate students.”

During his spare time Andy enjoys being with his family. “I enjoy following Norwich City, reading widely, modern art, and travel – all while running after my toddler,” he added.

Dr Will Bowers, Lecturer in Eighteenth Century Literature and Thought

Dr Will Bowers joins Queen Mary from the University of Oxford where he was a Junior Research Fellow. Dr Bowers is interested in the literature and intellectual culture of the long Eighteenth Century, and has published various articles on poetry, migrant communities, conversation, coteries, and traditions of classical learning in the period. His first book, The Italian Idea: Anglo-Italian Literary Culture 1815–1823, will be published by Cambridge University Press in December 2019.

Dr Bowers said: “I am looking forward to using London’s fantastic archives to begin a project on sociability and its role in the life of the capital from 1780 to 1850. I’m excited to begin this project in collaboration with Queen Mary’s experts on urban life and its cultures across the humanities and social sciences.”