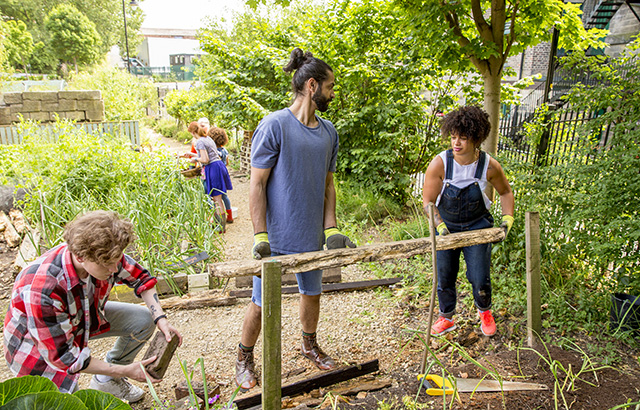 Community assets such as the arts, heritage sites, libraries, parks, allotments, volunteer associations and community groups can play a huge role in building resilient individuals and preventing mental illness, but they are often taken for granted.

The new network called MARCH will rethink traditional approaches to mental health, by bringing researchers together with policymakers and third-sector organisations to understand how these social, cultural and community assets can enhance public mental health and wellbeing, prevent mental illness and support those living with mental health conditions.

Dr Mark Freestone from Queen Mary’s Wolfson Institute of Preventive Medicine, said: “Sport, arts, libraries, heritage and cultural resources have all been shown to have a positive effect on people’s general mental health, but research and interventions working in these areas often proceeds in silos and lacks integration and impact.

“The MARCH network will fund and support projects in these areas and others, and help demonstrate a positive impact on mental health in times of increasing pressure on traditional mental health services.”

The MARCH network is funded by the Economic and Social Research Council, and is one of eight new Mental Health Networks announced today by UK Research and Innovation (UKRI) to bring researchers, charities and other organisations together to address important mental health research questions, supported with £8 million of funding.

The single largest cause of disability in the UK

Professor Sir Mark Walport, Chief Executive of UK Research and Innovation, said: “Mental ill health is the single largest cause of disability in the UK, and it is estimated that almost a quarter of the country’s population are affected by mental health issues each year.

“The UKRI Mental Health Networks will take a new approach to addressing this challenge by bringing together researchers across a wide range of disciplines with people who have experienced mental health issues, charities, health practitioners and other organisations. Through their work, the new Networks will further our understanding about the causes, development and treatments of a wide range of mental health issues.”

Central to the work of the MARCH network is the engagement of diverse cultural communities and resources across the UK, an area that will be led by Professor Kamaldeep Bhui of the Centre for Psychiatry, at Queen Mary’s Wolfson Institute of Preventive Medicine.

Professor Bhui will also represent the work of community psychiatry within the research team, and help guide the integration into existing mental health systems and consider implications for individuals with severe mental illness.

The ‘MARCH’ network proposes that Assets for Resilient Communities lie at the centre of Mental Health (M-ARC-H) and is led by Dr Daisy Fancourt from UCL, involving a range of organisations from around the UK.