Nicotine-laced nectar can speed up a bumblebee's ability to learn flower colours, according to scientists at Queen Mary University of London (QMUL). 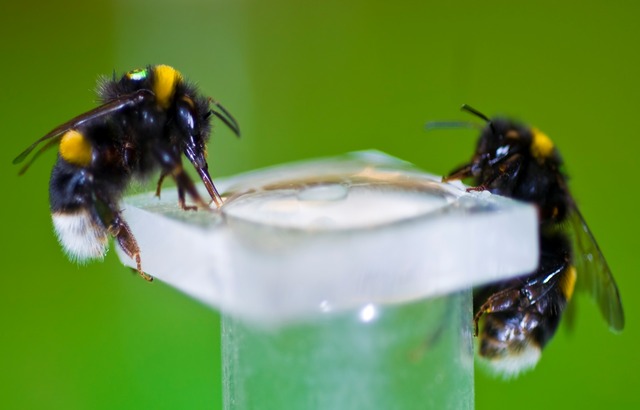 The researchers used artificial flowers in a tightly-monitored flight arena in the laboratory to mimic how flowering plants use animals as pollen carriers and reward pollinators with sugars found in floral nectar.

30 bees were allowed to forage on two types of types of flowers – one which contained a sugar solution and was blue in colour. The second type of artificial flower was purple in colour and had different concentrations of nicotine. Another 30 were tested with the two flower colours having the opposite contents.

The experiment was repeated with the nicotine-laced flowers having three different concentrations of nicotine - two of which were found within the natural range and another that was much higher. Only the unnaturally high concentration of nicotine deterred the bees from foraging for nectar.

Do the drugs work?

The team sought to understand whether nicotine plays a role in the bees’ ability to learn flower colours. In a follow-up experiment, 60 bees had to choose between flowers that had a sugar solution and another that was laced with nicotine – differentiated by the colour of the flower.

The bees learned about the flowers with reward (ones that contained the sugar solution) faster if it had been laced with nicotine, even at very low concentrations. The bees maintained a predisposition for the flower even after the reward had been removed, resulting in ‘addiction-like’ behaviour from the bee.

Professor Lars Chittka from QMUL’s School of Biological and Chemical Sciences, said: “Flowers typically reward pollinators ‘honestly’ with rewards such as sweet nectar, but nature’s trick box is endlessly resourceful: some plant species gain an unfair advantage over competing species by spiking their nectar with addictive substances, such as nicotine in tobacco flowers.

“Here we find that bees not only remember such flowers better, but even keep coming back for more when these flowers are demonstrably poorer options, as if they were truly hooked on these flowers.”

The research, published today (Tuesday 16 May) in the journal Scientific Reports, adds to the Chittka lab’s understanding of how bees – insects with a brain no bigger than a pinhead – can perform complex tasks.

Previously the lab has shown that bees can be trained to roll balls, effectively scoring a goal, and pull strings to obtain food. They have also shown, with researchers at Royal Holloway, University of London, that bumblebees that have been infected by parasites seek out flowers with nicotine in the nectar, likely to fight off the infection. The nicotine appears to slow the progression of disease in infected bees but has harmful effects when consumed by healthy bees.

The current research suggests that plants might manipulate pollinator behaviour for their own good, using psychoactive substances such as nicotine in the nectar.

Co-author Dr David Baracchi who is now based at the University of Toulouse in France said: “I am convinced that what we found with this study is just the tip of the iceberg. Plants may have hundreds of metabolites in their nectars and it is possible that many of them have to some degree similar psychoactive properties."

A potential concern is that nicotine acts on the same parts of the nervous system as neonicotenoids – popular pesticides that might make some flowers addictively attractive to bees – even though these substances are toxic for insects.