Competitive males are a blessing and a curse, study reveals

Showy ornaments used by the male of the species in competition for mates, such as the long tail of a peacock or shaggy mane of a lion, could indicate a species' risk of decline in a changing climate, according to a new study from Queen Mary University of London (QMUL). 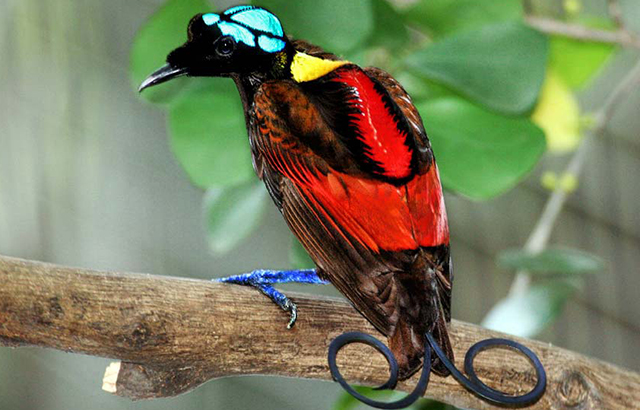 Males of many animal species compete for mates, either by producing showy ornaments to attract females, such as the plumes and bright colours of male Birds of Paradise, or, like stags and elephant seals, by fighting with other males for access to mates. Scientists have shown over the last few years that in many of these cases the winning males are fitter because they carry genes that make them better adapted to the environment – the so called ‘good genes’ effect.

The researchers from QMUL’s School of Biological and Chemical Sciences investigated whether these ‘sexually selected’ animals might be better able to cope with changes in the environment such as increasing temperatures or acidity.

Using a sophisticated mathematical simulation model that integrates both ecological and evolutionary processes, the researchers found that sexually selected species can adapt faster to new environments, and are less likely to go extinct. There is a twist in this peacock’s tail though - this effect only happens when the animal populations are large. When the populations are small, the presence of competitive males can actually make a population more likely to become extinct.

This is because males pay a high price for engaging in their competitions. Either they have to invest lots of energy in expensive displays, which then make them more vulnerable to predators, or they get injured and even killed in fights with other males.

When there are more than about 100 animals in a population this has little overall effect and the evolutionary benefits of sexual selection outweigh the costs - but when the population is below about 50 individuals the costs come to dominate and extinction becomes more likely.

Co-author Dr Rob Knell said: “Although these results are currently largely theoretical, they are relevant to the conservation of a huge variety of animals.

“Sexual selection is extremely common and is responsible for many of the most spectacular features that we see in modern animals, and as the environment changes this result will help conservationists assess the vulnerability of some of our favourite animals to global warming, ocean acidification and a multitude of other threats.”

The results are published in the Journal of Animal Ecology.