Dr Richard Coulton, based at QMUL's School of English and Drama, reflects on the discovery of Britain's oldest tea. Dr Coulton is one of three authors of a forthcoming book, Empire of Tea: The Asian Leaf that Conquered the World. 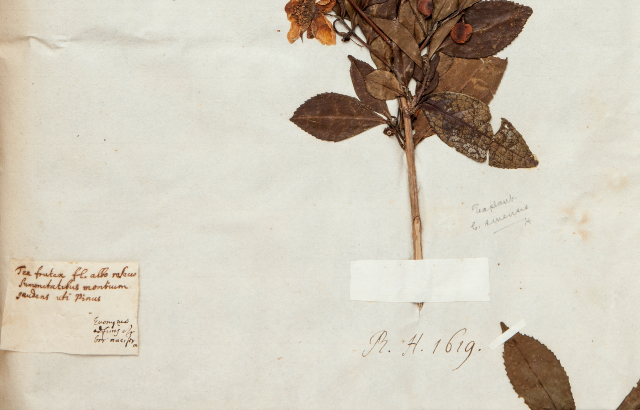 Last week we released a news story about our discovery of Britain’s oldest tea leaves alongside colleagues at the Natural History Museum in London. They had been a gift from the Scottish trader and ship’s surgeon James Cuninghame to collector extraordinaire Hans Sloane around the turn of the eighteenth century (Sloane labelled them ‘A sort of tea from China’, and they were catalogued as number 857 among his ‘Vegetable Substances’).

Our encounter with the tea was a heart-stopping moment. The last thing that we expected while researching the cultural history of a biodegradable food product was to encounter the stuff itself in the form of manufactured seventeenth-century green tea. But there it was, archived in a modest boxboard container, utterly familiar and hauntingly strange.

So, finding the tea was a real treat. Among other things it solved the problem of how to rewrite the introduction to Empire of Tea – the one section about which all the readers of our draft manuscript had been somewhat critical. It was also dependent on the generous assistance of the NHM, above all from Charlie Jarvis, Historical Collections Researcher and our guide through Sloane’s incredible Herbarium in the Darwin Centre, and Victoria Pickering, currently completing a PhD on Sloane’s Vegetable Substances.

Vicky’s digital transcription of the VS catalogue has made its surviving contents searchable for the first time in the modern age; so when we turned up to view and photograph botanical samples of tea collected by early-modern Europeans (including Cuninghame), it was a fairly simple – if hugely exciting – process to retrieve and identify the oldest tea in Britain. Collectively, we were able to reinvest with value, context, and significance an artefact that had been effectively locked down in the Museum’s collections for decades (if not centuries).

Regrets, I have one

Nonetheless, I have one regret about the episode. During the interview I didn’t speak with particular clarity about why the cultural history of tea in Britain is such a compelling set of narratives to recover. (When Maev asked what had drawn us to this project, I fluffed my lines by recounting prosaically a series of practical events rather than grandstanding my take on the book’s thesis.) So I’m going to try to do that now.

Q: What interests you about tea, and why did you want to write this book?

A: Tea was the first truly modern commodity of the consumer-oriented, globalised capitalism that Britain was instrumental in realising across the world (especially during the eighteenth and nineteenth centuries):

Firstly – then as now – tea was produced cheaply by agricultural labourers on one side of the world, and retailed cheaply to a market (including agricultural labourers) on the other side of the world. In the middle, tea made a few people who facilitated the supply chain – both in China and in Britain – very rich indeed. Their wealth was a consequence of exploiting global exchange on a massive scale.

Secondly, tea was something that nobody needed (it has no nutritional or subsistence value) but that everybody learned to want. It was a consumer luxury that Britain transformed into a social and economic necessity.

Thirdly, tea was the first commodity genuinely to reach a mass market in Britain, making consumers of everyone ‘from the palace to the cottage’. Alongside sugar – which does at least have the virtue of being a substance on which one might physically survive for some time – it was the first article of foreign production to be purchased by virtually every household in Britain on a regular basis.

We’ve learned to take these three aspects of our national and global economy for granted, accepting them as givens of the way things are. But they were strange and new conditions in the eighteenth century, that had to be developed and codified. Tea was the key commodity that enabled this process. To me therefore it’s fascinating that tea also came to indicate and ritualise some fundamental notions of Britishness: civility, sociability, prosperity, imperialism. Reading tea’s cultural history reveals something important about the relationship between British identity and global modernity. I joined Markman Ellis and Matthew Mauger in writing Empire of Tea because I wanted to tell that story.

Over the next few months we’re each going to blog more about our book, the narratives and arguments that it contains, and our experiences of researching and writing together.

The specimen was found during research for an upcoming book called Empire of Tea: The Asian Leaf that Conquered the World, written by Professor Markman Ellis, Dr Richard Coulton, and Dr Matthew Mauger. The book is published by Reaktion Books, and will be in bookshops in July 2015.