Queen Mary, University of London welcomed over 200 pupils from eight schools across the region, as part of our festivities for National Science & Engineering Week 2010. 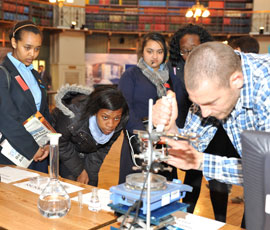 Pupils aged 15 - 18 years took part in a range of exciting exhibition of hands-on activities and attended science and engineering-themed sessions at the College's campus in Mile End, London. Along with more than a hundred other visitors young and old, they learned about the many ways science and engineering impact our Earth.

We've all seen movies where evil robots and computers take over the world, but what is the reality? In one session, called 'Mind of the Machine', visitors looked at artificial intelligence, the field of science that tries to build 'thinking machines'. They discovered how that humans are thinking machines too, but also what makes human brains special and what that reveals about the future of intelligent life on Earth. "I liked the way we learned, being active makes it fun", said one Year 10 pupil from Plashet School, a specialist science school in East London.

In the hands-on exhibition, visitors could immerse themselves in a world of interactive digital music and mathematical magic tricks. They learnt about how the Large Hadron Collider is expanding everything we know about the subatomic world, saw the view from Saturn and took a peek at high energy rays emitted from the Sun, which constantly bombard our own planet Earth.

As part of National Science and Engineering week, Queen Mary also welcomed esteemed speakers from the wider world of science. Leading computer scientist Professor Byron Cook explained how a new partnership with Microsoft Research Ltd could bring an end to computer crashes, and the revered physicist Professor Chris Llewellyn Smith discussed his views on 'The Energy Challenge' for the future.

Researchers from the Centre for Digital Music also took part in an exhibition exploring the relationship between science and society, held at the Royal College of Art. Designers worked with the engineers over many months on the IMPACT! Exhibition, asking probing questions about the future world of sound and what impact it will have on acoustic culture.

Coordinated by the British Science Association, National Science and Engineering Week is a 10 day programme of around 3,500 events running throughout the whole of the UK with the aim of celebrating science, engineering and technology and its importance in our lives. Hundreds of thousands of people take part in National Science and Engineering Week every year, attending activities organised by universities, schools, motivated individuals and national scientific bodies.