DNA (Deoxyribose Nucleic Acid) is the coding molecule that allows human cells to replicate and function. Human DNA is organised into compact structures called chromosomes of which humans have 23 pairs. In each pair, one chromosome comes from the mother, and one from the father. Twenty-two pair of chromosomes are the autosomes and the 23rd pair that determines your gender (XY-male and XX-female). The AIP gene is located on the 11th chromosome (Figure 1). Patients with an AIP mutation have one normal copy of the gene and one abnormal copy. This is called a heterozygote state.

Within your DNA there are streches of DNA called genes, which are sequences that code for specific proteins. The AIP gene codes for the AIP protein and it is synthetised in several types of cells including the cells of the pituitary gland.

AIP is thought to be a tumour suppressor gene. Its function is to keep the replication of the cell in order, preventing the development of tumours. In individuals with an AIP gene mutation, the function of the AIP gene is damaged and the mutation leads to have an increased chance to develop abnormally replicating cells, specially growth hromone and prolactin-secreting cells, and to develop an adenoma.

To date, around 50 different type of mutations (changes) have been identified throughout the AIP gene, causing the development of a pituitary adenoma. The majority of the mutations change the structure of the latter part of the AIP protein (marked with purple, blue, pink and red on Figure 2). 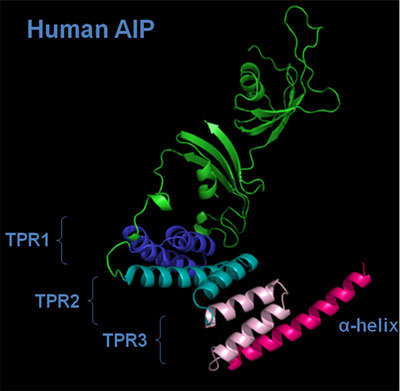 Figure 2. Human AIP showing the areas of the protein most often affected by mutations: the purple, blue, pink and red helicis.

The DNA consists of individual building blocks called bases, and a gene is formed by a particular sequence of these bases (Figure 3). At the beginning of the gene is a region called the promoter, which regulates how the gene is functioning. Following this is the protein coding gene sequence, which in AIP is approximately 1000 bases long, coding for a 330 amino acid long peptide. When a mutation occurs the sequence of the bases changes and this will result in a change of the protein coded by the gene. 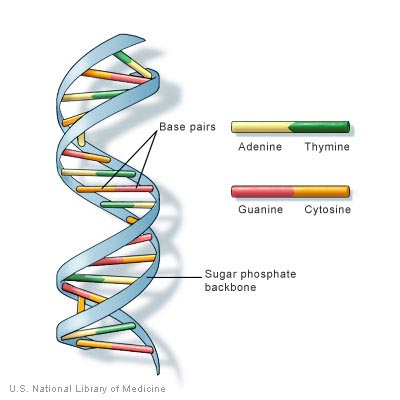 Figure 3. The structure of DNA

There are different types of mutations in the AIP gene:

The location and type of AIP variants described can be seen on the next figure (Figure 4). 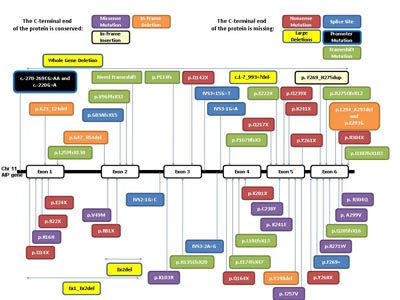 Figure 4. The location and type of AIP variants identified in patients with AIP changes. In the middle the thick black line and the black and white boxes (Exon 1-6) represent the AIP gene on Chromosome 11 (Chr 11). The blue thin arrows show the location of the AIP mutations and their 'name' (identification code) in colourful boxes representing the different types of mutations