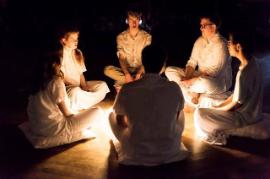 This hypnotic piece is set against the backdrop of the Barts Pathology Museum, a space focussed entirely on the mechanisms of the human body, and will be complemented by lighting and scent.

There will be a pre-performance discussion between Paul Edlin, director of music for QMUL, and Benedict Collins-Rice, director of The Facade Ensemble.