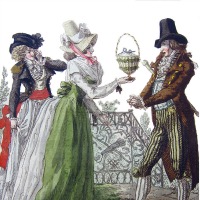 This talk is a part of the Public Lecture Series “Urban and Elegant: The Aesthetics of Living in the Modern European City” given by leading academics, which provides an overview of the European landscape of the so-called ‘elegant world’ to a broad audience and discusses specific media, spaces, and cultural practices of European urban elites and their lifestyle in the 19th Century.

In 1798 Friedrich Justin Bertuch, a Weimar-based entrepreneur and publisher, added another ambitious periodical to his already impressive portfolio: The newly established journal "London und Paris" catered to provincial audiences that were trying to come to terms with the fascinating and disturbing phenomenon of the "metropolis".

Such cities were completely absent in the culturally diverse and politically fragmented landscape of German-speaking countries of the time, which contributed to the sense of 'otherness' in the literary portrayals of London and Paris as emerging "world capitals" at the dawn of the 19th century.

However, Bertuch's new journal had to strike a balance between a cultural othering of the metropolis and a vivid evocation of its allures, even more so because another highly successful production of his publishing house, the "Journal des Luxus und der Moden", tapped into this notion of an imagined capital as the pinnacle of commodified elegance.

The lecture sets out to explore some of the visual and textual strategies by which Bertuch tried to sell the metropolis alternately as an amoral abyss and an epitome of elegance.

He was head of a number of major research projects including the Travels of the European elites in the second half of the 18th Century and Cultural Anthropology of Drawing, and is currently leading two collaborative research projects which focus on the maritime trade and visual culture in Japan and the Netherlands (1550-1680) and the garden design in transregional perspective (1650-1800).