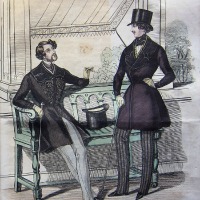 The dandy was a fashionable male of the 19th Century who achieved social influence by displaying distinctive elegance. But what were the specific 'rules of elegance' defining dandyism? What was the difference between national variants of dandyism? In her talk Dr Olga Vainshtein will interpret the dandies’ code of elegance as a system combining fashion, body techniques, emotional discipline, and strategies of behavior. The talk will analyse the aesthetic principle of Minimalism and consider further developments in the theory of dandyism as expressed in mid-19th Century European treatises. The concluding part of the lecture will discuss the distinctive features of Russian dandyism.

This talk is the first event of the Public Lecture Series “Urban and Elegant” given by leading academics, which provides an overview of the European landscape of the so-called ‘elegant world’ to a broad audience and discusses specific media, spaces, and cultural practices of European elites in the 19th Century.

Further information is available at poeteleg.eu/events. The talk will be followed by a Q&A session and a wine reception.