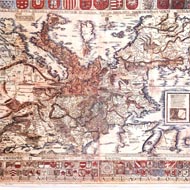 Lecture Synopsis
As the United Kingdom prepares to leave the legislative and economic union of Europe, it is a good moment to think about our membership of cultural Europe. For part of the shock felt by many people who voted to remain is cultural: it took the Brexit vote to make them realise how connected to Europe they felt in many different spheres, including the arts, and how disconnected others felt.

But what, if any, has been the contribution of literature to this sense of connectedness? The connections of English literature now are global, like the language. But if we go back in time to the medieval and early modern period (1300 – 1750) we find that the cities and nations of what is now the United Kingdom and Ireland were embedded in a Europe-wide literary culture. How should we describe this culture and recount its history while avoiding the pitfalls of Eurocentric and nation-centric perspectives? Is it the case that a common body of texts from Rome, Greece, and the Levant disseminated classical and Christian values across a continent and then across the globe? Or are there other ways of tracing the literary connections across and beyond the western peninsula of the Eurasian landmass?

Meet our Professor
Warren Boutcher took English, French, and Spanish at A level and could not decide whether to do English or Modern Languages at university. He continued to do both while taking a degree and serving as a lecturer in the Faculty of English, Cambridge University, between 1981 and 1994. He then left to follow his doctoral supervisor Lisa Jardine down the M11 to the School of English and Drama, Queen Mary University of London. For his PhD, he had studied a translation from French into English by a refugee Italian: John Florio’s version of Montaigne’s Essais (London, 1603). In his post-doctoral work, this led him to explore Montaigne’s work and its circulation as a European phenomenon. The result is a two-volume study of The School of Montaigne in Early Modern Europe, currently due to appear with Oxford University Press on 16 March 2017. He is now working on a project to edit a literary history of Europe from 1559 to 1648, with up to 100 chapters to be contributed by scholars worldwide. Each chapter shall focus on a single text and trace the connections and itineraries, as well as the obstacles and limits, revealed by that text’s travels in Europe.