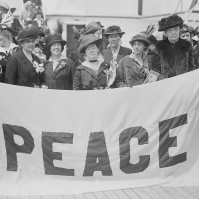 The centenary of the Women’s Peace Congress, which took place at The Hague in April 1915, offers a unique opportunity to reflect on the past, present and future of women’s transnational organising and to ask how far feminist perspectives have been mainstreamed into international debates about security, development and human rights over the past century.

The women from belligerent countries who gathered at The Hague whilst war waged across Europe developed a vision of gender-based solidarities which transcended national borders and in which peace and women’s rights were intimately intertwined.

The congress led to the creation of the Women’s International League for Peace and Freedom (WILPF), which soon became one of the most distinctive voices within internationalist politics in the interwar period and a powerful strand within twentieth-century trajectories of feminist internationalism.

This event, a joint initiative between QMUL’s Mile End Institute and History and Policy, will take the 1915 Congress and the founding of the WILPF as a point of departure to explore critical questions about the relationship between gender, activism and international politics, drawing on a range of historical and contemporary perspectives.

This event comprises three parts. Guests are welcome to join just one or all three sessions. Use the book now link to book your place.