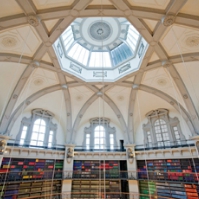 Cultures and Research at Queen Mary

An Afternoon of Debate and Discussion

What does it mean to belong to the culture of a discipline?

In 1959, C.P. Snow argued that British intellectual life was split into 'two cultures' - those of science and the humanities. Featuring scholars drawn from the Schools, Institutes and Faculties across the College, this event asks whether disciplines do have cultures, and what makes them distinctive. While much attention has been paid in recent years to the question of interdisciplinary, in this debate we will consider whether there is any value in exploring the particularities and practices of scholarly fields.

Participants will discuss questions such as: in what cultures do we participate as scholars? What do we mean by the language we use to describe what we do? Was Snow right in suggesting that particular forms of scholarship come with attendant cultures, values, beliefs, forms of language, tastes and lifestyles?  While certain terms are shared widely across many forms of scholarship, such as method, experiment, hypothesis, knowledge, creativity - do these terms mean the same thing for different fields?

Featuring speakers from the Faculties of Humanities and Social Sciences, Medicine and Dentistry, and Science and Engineering, this event invites all scholars at Queen Mary to join us and spend the afternoon pondering the cultures that they belong to, asking finally what these cultures might actually have in common.

It's very rare that staff across faculties have the opportunity to hear about each other's research. The afternoon has been scheduled during Reading Week in the hope that as many staff as possible across the College will be able to attend. The afternoon will comprise four panels and roundtables interrogating what terms such as method, experiment, creativity and hypothesis might mean for scholars in a wide range of disciplines.