Embarking on new research terrain and exploring new cutting-edge ideas was always a thrill, as was sharing such knowledge to peers and undergraduate students. These “Eureka” moments, particularly in the target language, are among my most cherished experiences during my PhD at Queen Mary. 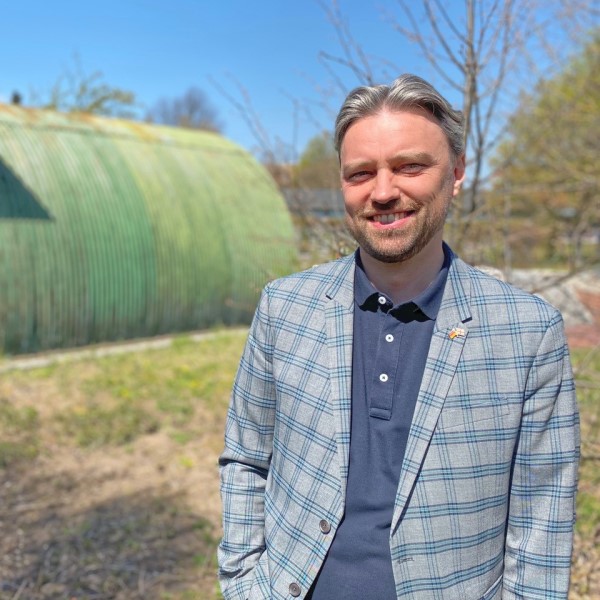 Attracted by leading expertise in the German Department and the Centre for Anglo-German Cultural Relations as well as the wealth of German-language resource in and around London, Queen Mary was my first and only institutional choice to do a PhD. Having accompanied me through my undergraduate and postgraduate MA journey in German, the expertise of Professor Rüdiger Görner lent itself to my doctoral research project into German soundscapes. My interest in this field of study derived from my Year Abroad in Idstein, near Frankfurt, where I took an interest in German perceptions of sound, music and noise, not least how cities identified themselves in terms of their acoustics.

What sparked your initial interest in the German language?

On my eleventh birthday, I received two German language learning CDs from my aunt. Playing these CDs exposed me to the sound of a new language, one that I was eager to immerse myself in at a great depth. This interest soon converted into the idea of moving to the German-speaking world to immerse myself in the language thanks to dedicated teachers at secondary school, most notably my late German teacher, Mr. Graham Newson. He invested a lot of time and energy in helping me get my head around complex grammar structures, presenting them in the context of his own experience of living and working in Germany. This was nothing less than inspirational, setting my own sights on a similar path to his of German language learning and in-country experience.

How would you summarise your experience of studying for your PhD? What were some of the challenges and highlights?

The vast majority of PhD candidates go through a rollercoaster ride of intellectual discovery and engagement as well as real stresses and strains of a heavy workload and deadlines in teaching, research and administration. My journey was no different. Embarking on new research terrain and exploring new cutting-edge ideas was always a thrill, as was sharing such knowledge to peers and undergraduate students. These “Eureka” moments, particularly in the target language, are among my most cherished experiences during my PhD at Queen Mary.

What did you enjoy most about studying within the School of Languages, Linguistics and Film at Queen Mary?

Being part of a lively community of learners, teachers and researchers so devoted to the pursuit of German language and culture as an academic discipline.

Can you tell us about your career since completing your degree? How has your PhD research influenced your career so far?

In the latter half of my PhD, I moved from London to Oldenburg to complete archival research and the write-up of my doctoral thesis. Somewhat strapped for cash in the final year, I started teaching English as a Foreign Language, going on to create and co-run a language school as its Director of Studies in Oldenburg. Becoming the largest institution of its kind in Oldenburg with a research library, it became the go-to place for English, most notably for business English, medical English and general English. Departure from the institution I helped to build at the end of 2017 allowed me to focus on my German public speaking career and my Your Speaker platform. The German cultural knowledge base, the German language skills, and a rich mix of soft skills were all fine-tuned during my PhD research, so much so that I believe my PhD was invaluable in the pursuit of this career path.

You recently presented a German TV documentary celebrating the 75th anniversary of the founding of the German federal state of Niedersachsen (Lower Saxony) by the British military government. Can you tell us a little about the significance of Niedersachsen and its history?

Niedersachsen is Germany’s second largest federal state after Bavaria in terms of landmass. Having strong ties to Britain predating the founding of the state 75 years ago, Niedersachsen is home to Hanover, Celle and Braunschweig (Brunswick), names that resonate with any royal historian: it is here where the Georgians, the Royal House of Hanover (1714-1837), had their roots. 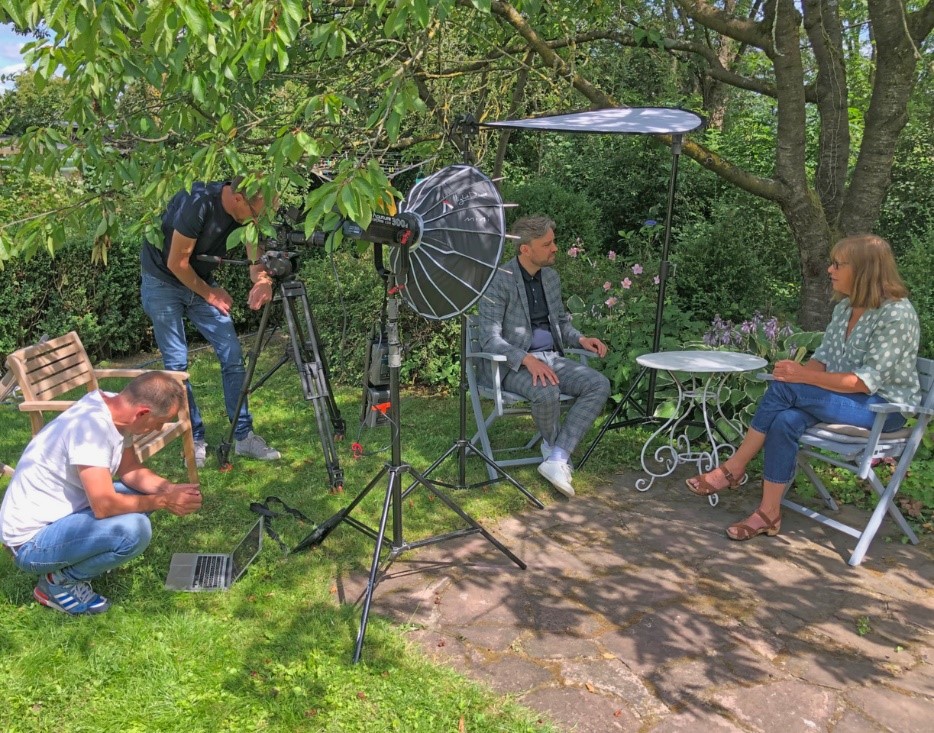 It is certainly no coincidence of history that the British ended up as the occupying power in this part of Germany after World War II. This year marks the 75th anniversary of the founding of the state under British military governance, bringing together the former kingdom of Hanover, former duchies of Brunswick and Oldenburg as well as the principality of Schaumburg-Lippe.

How did the documentary come about and how did you prepare yourself for a presenting role?

Zentralfilm, a Hanover-based independent production company, was searching for an individual to front their historical documentary Happy Birthday Niedersachsen who could bring a British personal touch to the programme. Having finished the write-up stage of my PhD in Oldenburg and continuing to live and work in the Lower Saxony city for over 10 years, lent itself to the line of narration that the documentary producers wanted to pursue. 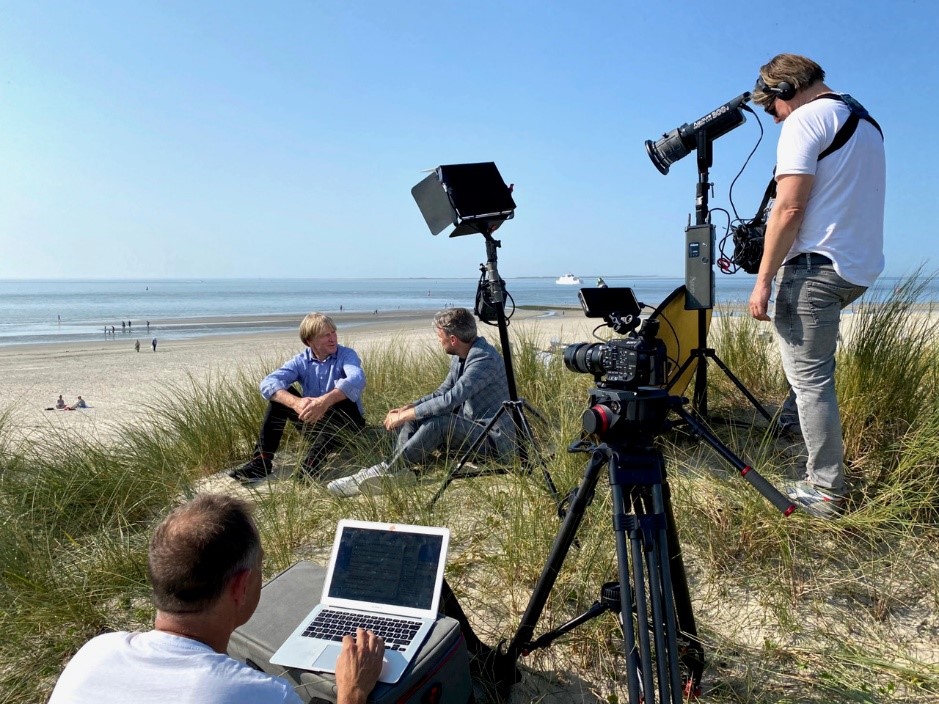 Developed throughout my studies and 10-year experience in Germany, my near-native German speaking skills with a slight hint of a British accent made the right language impression on the producers and later, on the audience. Soon after a somewhat informal casting speaking into camera on my impressions of Niedersachsen, the German regional broadcaster NDR gave the go-ahead for me to present the documentary.

Be sure to exploit the currency of a Queen Mary degree at a London-based university that gives you a cutting-edge over so many universities and cities around the world.

Work on community radio and local TV as an interview presenter in both English and German came in handy in developing the skill of coming across natural, relaxed and professional in front of camera. Perhaps the most difficult part of the documentary for me personally turned out to be the voice-over work, requiring numerous takes in a tiny, dark, soundproof cabin. To perfect my performance and speech delivery, a Berlin-based speech trainer was brought in to help me develop voice and breathing techniques to recreate that natural style of delivery that came second nature to me on set, but was difficult to recreate in the sound booth.

How does your job allow you to explore your passions and work on the things that you feel passionate about in life?

Making a TV documentary, such as Happy Birthday Niedersachsen, has allowed me – even under the difficult circumstances of the pandemic – to travel and interact with people that have made their own special mark on society. As important as the on-camera, on-location recordings were, the behind-the-scenes chats and conversations (ones that do not make it into the film but prove to be as insightful and intriguing as those on camera) and the act of listening and learning through these conversations, provide much food for thought when it comes to ideas for future TV documentaries, future travel and future exploration.

What are some of your interests outside of your work?

Just as the documentary took me on a journey to far-flung corners of Niedersachsen, I am a keen international traveler and off-the-beaten-track explorer, interacting with peoples and cultures far from home. Be it tenting on the Aral Sea in western Uzbekistan, exploring the cityscapes of Pyongyang in North Korea or planning a road trip through Iran, travel and travel planning is an intricate part of my life outside of work.

What was the most memorable thing about your time at Queen Mary?

Without a doubt, the most memorable thing about my time at Queen Mary was the people, be it the high-calibre academics in the School, the fellow postgraduate peers hanging out in the Lock Keeper’s Cottage Graduate Centre, or the administrative and support staff – they all made the experience unforgettable and unique.

What would your advice be to students interested in studying Languages at Queen Mary?

Be sure to exploit the currency of a Queen Mary degree at a London-based university that gives you a cutting-edge over so many universities and cities around the world.

This profile was conducted by Alumni Engagement Coordinator, Nathalie Grey. If you would like to get in touch with Dr Goodyear or engage him in your work, please contact Nathalie at n.grey@qmul.ac.uk.