Is happiness a matter of our genes?

Senior lecturer in development psychology at the School of Biological and Chemical Sciences Dr Michael Pluess organised a public event at Queen Mary University of London, in partnership with the Centre for Economic Performance from the London School of Economics and Action for Happiness.

The event, titled “Is Happiness a Matter of our Genes? New Research Findings and their Implications for Society”, involved three short talks by leading researchers in the field and a panel discussion on the topic between academics and politicians.

Over 140 people attended the evening event which took place in the Arts Two Lecture Theatre on the Mile End campus. After a short welcome by Dr Pluess,  Dr Mark Williamson, Director for Action for Happiness, was guiding as the chair through the evening.

The first speaker, Professor Lord Richard Layard, Emeritus Professor of Economics at the London School of Economics and Founder-Director of the Centre for Economic Performance, spoke about how our experiences over life affect our well-being presenting results from a large British cohort study suggesting that mental health is more important for our life satisfaction than income, education or employment.

The second speaker, Professor Meike Bartels, University Research Chair and Professor in Genetics and Wellbeing at VU University Amsterdam, presented an overview of research on the genetics of well-being including new meta-analytic studies according to which up to 40% of the differences in well-being between people are explained by heritable factors and brand new findings on one of the largest genetic studies every conducted which included almost 300,000 people and led to the discovery of several gene variants that are associated with psychological well-being. 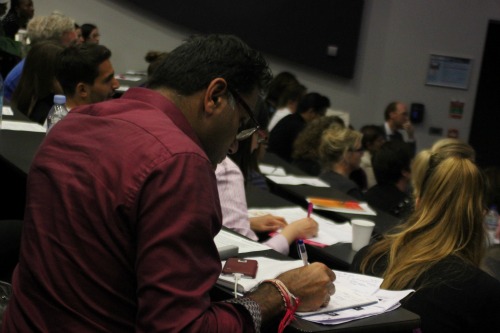 Finally, Dr Michael Pluess introduced the notion of gene-environment interplay presenting several empirical studies that emphasise that genetic characteristics may determine whether and to which degree environmental influences shape our well-being rather than having a direct effect on our well-being. The three talks were followed by a lively panel discussion which in addition to the three speakers also included Professor Felicia Huppert from the University of Cambridge, Professor Elaine Fox from University of Oxford and Tim Loughton MP. After discussion between the panel members, the floor was opened for the audience to ask questions and comment on points raise by the panel. After an engaging and enthusiastic discussion between panel and audience, Dr Williamson concluded the successful event.

The event was inspired by the release of Dr Pluess’ new edited book, Genetics of Psychological Well-Being, published by Oxford University Press.  The first book of its kind, it is a major contribution to the positive psychology literature, and important for all those in the fields of positive psychology, psychiatric genetics, and well-being.