Domestic chicks can master the abstract concept of “absence”

New experimental findings, published in eLife by an international research group involving Szabó from Central European University, Dr Elisabetta Versace from Queen Mary and researchers at the University of Trieste and the University of Trento shows that young domestic chicks are able to master the idea of the absence of an object. In a nutshell, chicks care about “nothing”. 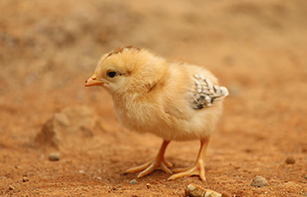 This is the first experimental study with animals showing evidence for this at a very early age without any kind of training. The findings could suggest that the ability to detect the absence of objects belongs to the initial cognitive repertoire of vertebrate species, which might be the roots of more abstract thoughts in humans.

Dr Elisabetta Versace, Senior Lecturer in Psychology at Queen Mary said, “Human thought readily relies on the concept of nothing, for instance, when we stare at the night sky and think about the deep void. What’s more, we even have a number that denotes nothing or no items, that is zero.

Humans can use language to encode and express such elevated thoughts, but there is still speculation as to where these concepts come from. In our experiment we investigated if it is possible that we share the roots of such abilities with other species and we have found that to be the case.”

How was the research conducted?

CEU researchers Eszter Szabó, Ernő Téglás, Gergely Csibra, and Ágnes Melinda Kovács teamed up with Cinzia Chiandetti (University of Trieste), Elisabetta Versace (Queen Mary University of London), and Giorgio Vallortigara (University of Trento) to present 8-day-old chicks with situations in which either the presence or the absence of an imprinting object should be expected and compared their reactions, e.g. how long they looked at the scenes and which eye they preferred to use, when being placed in expected and unexpected situations.

While chicks showed variation in their reactions in both situations, there was a difference in their response pattern depending on whether the object should have been present or absent in the first place.

Importantly, when they noticed the absence of an object (because it left the scene) and were faced with an unexpected situation (the object magically appearing), chicks, and in particular females, responded like they were seeing something new.

The chicks preferred to use their left eyes to inspect the scene, which is typical behaviour displayed for novel objects.

However, the object could only be considered as novel if the chicks had previously explicitly expressed noticing its absence at that location. Thus, this response suggests that chicks must have formed an expectation about the absence of the object, and perceived the appearing object as a novel one, even though it looked identical to the imprinting object.

The full article can be accessed at https://elifesciences.org/articles/67208