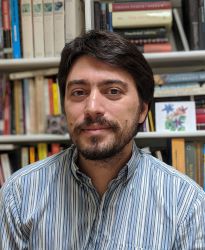 Felipe Antunes de Oliveira will join SPIR in January 2021 as Lecturer in International Development and Global Governance. His research sits at the intersection between Latin American Political Economy, Global Economic Governance, and International Relations Theory. He is particularly interested in Global South perspectives on political economy. His work strives to renew dependency theory, in dialogue with other contemporary historical materialist perspectives.

Felipe’s professional experience includes high-level international policy practice in government and international organizations, as well as teaching and research. As a career diplomat, he worked at the Department of South American Politics of the Brazilian Ministry of External Relations (2012-2014). He also acted as advisor to Brazilian Executive Director at the International Monetary Fund (IMF) (2019-2020). Before joining SPIR, he lectured at Sussex University (2017-2018).

He is currently working on a book on theoretical and political alternatives to neoliberalism and neodevelopmentalism in Latin America.

Antunes de Oliveira, F. (2021). ‘Who are the Superexploited? – Dependency, Gender and Race’ in Global Capitalism in Latin America and Europe: from situations to mechanisms of dependency. Edited by Madariaga, A. and Palestini, S. Palgrave MacMillian (forthcoming).

‘Vania Bambirra: a voice from the Global South’, Women in the history of international thought, 21 July 2020. https://whit.web.ox.ac.uk/article/vania-bambirra-voice-global-south

‘Brazil’s economy: Why I was wrong to be an optimist’, The Conversation, 17 August 2018. https://theconversation.com/brazils-economy-why-i-was-wrong-to-be-an-optimist-101685

‘Lula or nothing? The dilemmas of the Brazilian left’, Monthly Review Online, 09 July 2018 https://mronline.org/2018/07/09/lula-or-nothing-the-dilemmas-of-the-brazilian-left/

‘Why Brazil’s economic rollercoaster is far from over’, The Conversation, April 13, 2016. https://theconversation.com/why-brazils-economic-rollercoaster-is-far-from-over-57372