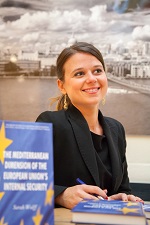 Dr Sarah Wolff, lecturer in the School of Politics & IR, has won two prestigious awards for her research from the Leverhulme Trust and Fullbright-Schuman Program.

Her Fulbright-Schuman award, in collaboration with the Transatlantic Academy, will support research on whether religion matters in transatlantic partners’ engagement with Islamist political parties.

This research project will seek to demonstrate that networks of engagement exist between transatlantic partners through looking at two case studies: (i) a comparative analysis of the European External Action Service and State department foreign policies since 2011, and (ii) a comparative analysis of the US National Endowment for Democracy and the European Endowment for Democracy.