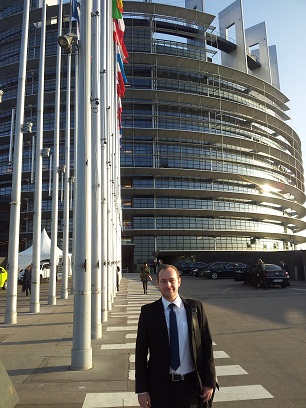 It isn’t often that a student like me gets to meet the people in the positions of power that I spend my week studying. Working through our readings, it’s easy to think of bodies like the European Parliament as autonomous beings, churning out decisions and policies that we then analyse using (so our lecturers hope) some kind of theory. But actually being there and meeting the people who make those decisions was an eye-opening experience. This is how I spent my two fascinating days at the European Parliament in Strasbourg last month, lobbying on behalf of the Global Zero campaign for the elimination of nuclear weapons.

I was struck by the sharp ideological divides between our representatives, and how these are not just based on the party line but are reflected in the people themselves. We in the UK are lucky enough to be represented by some inspiring people, who take the time to listen, engage in discussion, fight for outcomes that benefit the many, and, most importantly, didn’t kick me unceremoniously out of their office with a resounding “NO!” On the other hand, an encounter with Nick Griffin reminded me that European politics unfortunately provides fertile ground for those with backward-looking, extreme views, which contribute little to the resolution of global threats and issues.

The declaration being presented to the Parliament by Global Zero is an attempt to address such a threat, the continued existence of nuclear weapons. Global Zero campaigners from around the world are calling on the European Parliament to mirror our unity and concern for the future, to take action now and join the movement for the elimination of these weapons of mass destruction. Nuclear weapons are a relic of an old politics, one that emphasises difference over compromise and cooperation. I hope Global Zero will serve as a wake-up call to those who still cling to this outdated and dangerous way of thinking.

To add your voice, sign our petition to the parliament here: www.unitedforzero.org

Find out more about us: www.facebook.com/globalzeroqmul