A zombie game is just one of three new smartphone apps created by students at Queen Mary University of London and supported by QApps, the university’s ground-breaking app development venture. 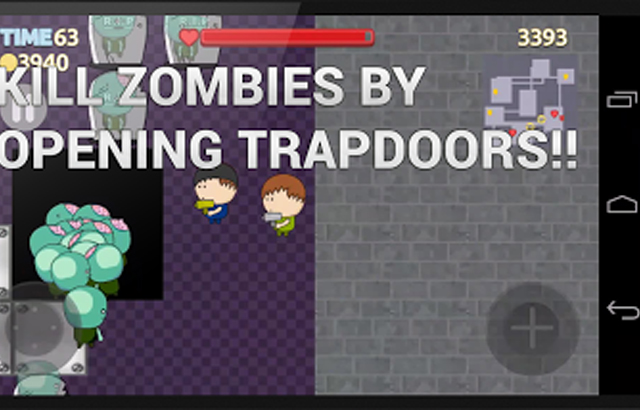 A screenshot from Trapdoor Zombies

The apps, detailed below and free to download, show how knowledge gained during undergraduate degrees can be applied to produce potentially commercial outputs.

Professor Peter McOwan, Vice Principal for Public Engagement and Student Enterprise, and co-founder of QApps in collaboration with Queen Mary Innovation, comments: “QApps was created to help support our students and staff in turning their ideas and research into useful and fun smartphone technology.  The spread of the smartphone and the resulting app revolution has really lowered the barriers for entry to the global marketplace, allowing our students to creatively apply the mix of skills they have gained in their study to develop professional software products.”

The latest apps are:

Developed by third-year computer science student David Kilanowski, this is a fast-paced, action-based game where the player tries to survive swarms of zombies and rescue followers who then help the player to fight the zombies. Players only progress by defeating the games’ endless levels of difficulty.

David said: “My main challenge was finding the right difficulty balance, as many users were finding it too hard in early versions of the game.”

Reviews for the app on the Google Play website have described it as ‘very addictive’ and ‘a perfect game to play when you’re on the tube.’

The game responds to the phone’s position by using its accelerometer: when the phone is moved downwards the trapdoors inside the game open to trap zombies. It also has platforms that are randomly generated so each level never the same.

The developmental group for GeoSound was led by Arjun Shankar who is studying for a Masters in Computer Science. It uses a person’s current location via Google Maps as a means to remix a song of choice.

Based on Tunetrace, an award-winning app that turns drawings into music, GeoSound uses the framework of surrounding roads to rework the song, creating new remixes and adding a twist to some of your favourite songs. The user can test the app out in different locations, and see how the song varies depending on the different surroundings.

Arjun commented: “GeoSound provides a social music experience like no other. How many times have you listened to the same song over and over? Your favourite song changes its beat to where you currently are, just like magic.”

Webmorph, created by computer science student David Omid, empowers people to edit websites quickly, easily and without having to use code. It’s the first mobile app that allows users to edit websites through touch gestures ensuring visual elements can be amended directly on the iPhone or iPad, making web design easier for everyone, especially for people who may not be used to HTML and CSS coding.

David wants to keep developing the app in the future by adding new features, improving the user interface and potentially commercialising it. He says: "I'm planning on adding a lot more editing features which could make web design quicker and easier for more people. I also have plans to port the app to other platforms in the future and improve the user interface, so I can target a larger audience and provide a richer and more engaging product overall.”

Trapdoor Zombie: available on Android only

GeoSound: available on Android only

Webmorph: available iPhone and iPad only

Find out more about QApps