A Queen Mary physicist and a Turner Prize winning artist have teamed up to create a new exhibition of sculptures and drawings inspired by String Theory research. 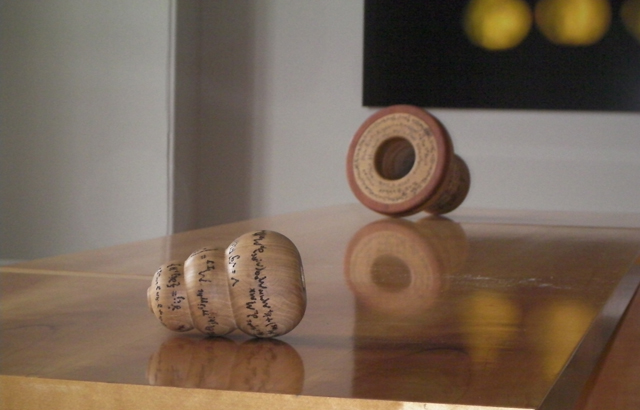 Sculptures on a theme of duality © Grenville Davey

With its strong focus on symmetry and geometry in nature, Dr Berman’s work naturally appeals to artists. In 2011 he began a collaborative process with British sculptor Professor Grenville Davey, winner of the Turner Prize in 1992, to create Interalia 2014.

Running at the CHELSEA space from 23 April – 31 May 2014, the exhibition challenges viewers to explore relationships between pairs, and reflects how people who are unfamiliar with theoretical physics may respond to such an unusual concept.

String Theory identifies nature’s most basic building blocks and brings together the diverse ideas of 20th Century physics, such as quantum theory and Einstein’s theory of general relativity.

Dr Berman explains: “The work focuses on structural resemblance and takes the circle as its emblematic symbol of nature’s symmetry. The circle is also central to the hidden symmetry in String Theory, known as T-duality.”

Professor Davey adds: “My long-term sculptural interests have often been drawn to relational works where pairs or families of works show a relation; as such I was drawn to the research of Dr Berman where symmetry and duality play a central role.”

Berman and Davey worked together discussing the ideas in Berman’s research, sketching and thinking about what an abstract visual notion of duality could be. This happened initially over a six month period when Davey was artist in residence at Queen Mary but then continued over several years. This resulted in a series of sculptures inspired by the physics rather than a representation of it.

Berman comments: “No one is meant to see the sculpture and understand the contemporary physics but they are meant to sense that what underlies these works is something abstract and mysterious.”

Dr Berman has been working at the interface of art with theoretical physics for many years. He has collaborated with a variety of artists including Jordan Wolfson for the Cartier award winning piece at the Frieze art fair in 2009. He has given talks at the Tate Modern, The Royal College of Art and The Institute of Contemporary Art.

Grenville Davey won the Turner Prize in 1992, he has since been a leading figure in British sculpture with contributions to the British academy retrospective of British Sculpture and recent works in the Olympic Park. He has previously undertaken a residency at the Centre for Research in String Theory at Queen Mary and has exhibited extensively across the UK and Europe. Davey is now the Programme Leader of MA Fine Art, University of East London and a visiting Professor of the University of the Arts London.