Saturn’s rings reveal how to make a moon

Disturbances in the icy rings of Saturn have given scientists an insight into how moons are made. 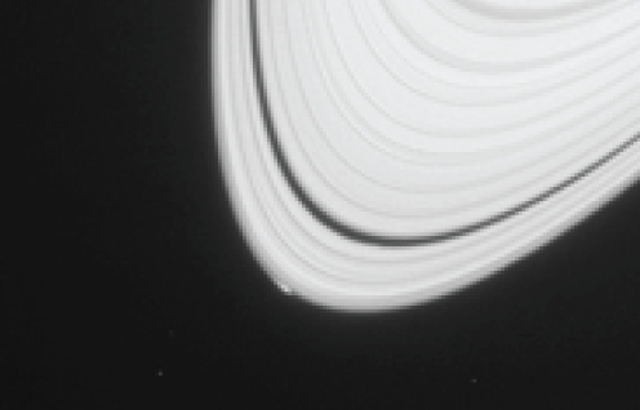 Writing in the journal Icarus this week, Professor Carl Murray from Queen Mary’s Astronomy Unit reports that recently discovered disturbances at the very edge of Saturn's outer bright A ring result from a small icy object that formed within the ring and which may be in the process of migrating out of it. They have nicknamed the object, ‘Peggy’.

"We hadn't seen anything like this before," explained Professor Murray. "We may be looking at the act of birth, where this object is just leaving the rings and heading off to be a moon in its own right," he said.

Saturn's rings are a small-scale version of discs of ice and dust that surround young stars. One reason for high interest in how moons form in Saturn's rings is insight into how Earth and other planets may have formed and migrated within a disc around our star, the sun.

The image was taken with Cassini's narrow angle camera on April 15, 2013, nearly nine years into Cassini's examination of Saturn's rings and moons. The discovery image and more than 100 others examined in the past year reveal a variety of arcs and other features at the outer edge of Saturn's A ring, including un-anticipated discontinuities at the edge of the A ring. Professor Murray and his team attribute all these features to a nearby object's gravitational effects on ring particles.

Many of Saturn's 62 known moons are mainly water ice, like the particles that make up the rings. From that fact and others, such as a general progression in size of the larger of the icy moons being farther from Saturn, researchers have recently proposed that the icy moons formed as agglomerations of ring particles and then moved outward, merging with other moons on the way.

"The theory holds that Saturn long ago had a much more massive ring system capable of giving birth to larger moons," adds Professor Murray. "As the moons formed near the edge, they depleted the rings and evolved, so the ones that formed earliest are the largest and the farthest out. The mass of the ring system that produced them has been getting smaller with time."

It is possible that formation process has ended at Saturn, with rings now too depleted to make more moons. That's why the Peggy discovery has generated excitement.

Peggy would likely never have been detected if it had migrated beyond the outer edge of the ring, where its gravitational signature would be too weak to cause visible effects in the rings. If it ends up orbiting beyond the rings, then it cannot keep growing by catching more particles. Breaking into smaller pieces, it may not even survive.

Professor Murray and his team are lucky to have spotted this example of moon birth at just the right time, and are now wringing from the observations all that they can learn about this process. In particular, they are seeing that older, bigger siblings may play a role in the formation of a new moon.

Professor Murray worked with a team including Nick Cooper, Gareth Williams and Nick Attree based here at QMUL, and Jeff Boyer at JPL. They were also assisted by local secondary school student Jenya Morrice from Ardingly College, who spent a week working with his team as part of our annual Cassini Scientist for a Day competition.