Bumblebees can distinguish between safe and dangerous environments, and are attracted to land on flowers popular with other bees when exposed to perilous situations, according to new research from Queen Mary University of London. 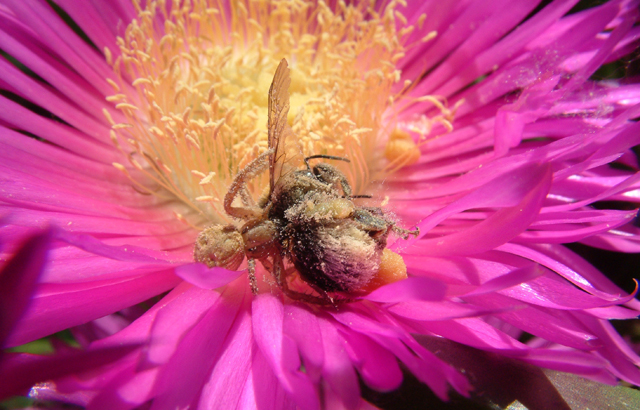 A bumblebee is caught in the fangs of a crab spider while foraging for food.

The study published in the journal Proceedings of the Royal Society B, shows that past experience of predation causes bumblebees to join other bees already safely feeding on flowers.

Co-author and PhD student Erika Dawson said: “Our experiment shows for the first time that when bees find themselves in these predator-infested environments they locate safe places to eat by joining other bees that are already safely feeding on flowers.”

The scientists trained bees to differentiate between safe and dangerous environments: when bees landed on a flower associated with danger, foam pincers would trap the bee and prevent it from foraging. This simulates an attack by a crab spider, a predator that lurks on flowers to catch pollinators, and can hide by changing its colour, like a chameleon.

Erika added: “It’s similar to walking through a bad neighbourhood – you’re more likely to choose a busier route, where there are lots of other people around than a deserted street, to get to your destination, since your chances of being attacked are probably lower.”

Bumblebees face similar danger when foraging for food. Avoiding being eaten can be tricky as predators are often disguised or undetectable. The authors suggest that bees use information from other bees to help them to avoid these dangerous situations.

“These results show a remarkable flexibility in pollinators’ strategic foraging decisions. Bees normally spread themselves out among flowers to minimise competition, but when danger lurks they dine together to seek safety in numbers,” commented co-author Professor Lars Chittka from Queen Mary’s School of Biological and Chemical Sciences.