A stripped down version of the drumming robot developed by researchers at Queen Mary University of London (QMUL) has delivered its first public appearance, playing along with a young audience member. 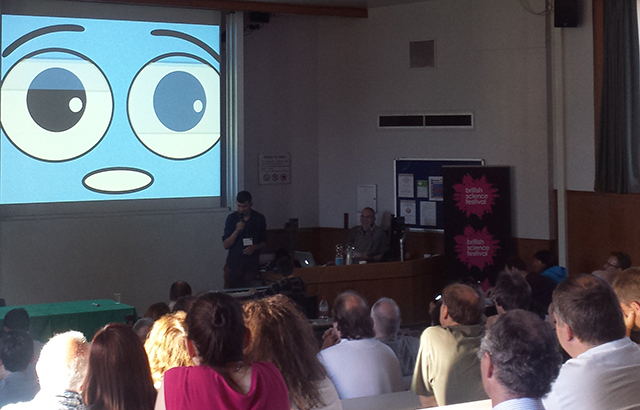 The robot nicknamed Mortimer was developed as part research into the ways in which humans interact and build social bonds with robots and made his debut during a talk by Professor Peter McOwan, QMUL's Vice-Principal (Public Engagement and Student Enterprise).

Professor McOwan’s speech entitled ‘When Fridges Attack: Big data meets intelligent machines’ took a diverse audience of scientists and families through the challenges and opportunities presented by the era of artificial intelligence (AI). The title came from fact that 100 years after the first domestic refrigerator appeared, earlier in 2014 a ‘smart fridge’ was used to send spam for the first time.

After a brief introduction to the ‘Internet of Things’, where your heating will be able to predict when you’re going to arrive home and your fridge will know that your friend Bill comes round on Tuesdays and you usually eat macaroni cheese together so knows to order the right ingredients; and to big data, which is simply large collections of information, Professor McOwan began to talk about the combination of AI and big data.

Mimicking the learning patterns of the brain, where repeated interactions between neurons strengthen links and improve recall and association, and AI system can use potentially hundreds of thousands of data dimensions to herd data into meaningful groups of its own choosing like a digital sheepdog.

AIs can similarly mimic the way the human visual cortex breaks up and processes an image, deciding what’s important and what’s not. Professor McOwan demonstrated this with a programme he created which chooses which part of an image is most or least likely to be noticed and removes it. The audience immediately spotted the change that the AI had decided was noticeable but found it much harder to spot the less obvious change.

Professor McOwan handed over to Louis McCallum to talk audiences through the difficulties of building social links with electronic interfaces from poor sensors on an automatic checkout to Microsoft’s infamous Clippy who irritated early users of Office program and a snack delivery robot who destroyed the illusion of intelligence by repeatedly offering snacks at doors.

Louis’ idea is that music can help to build these links and experiments with Mortimer who develops his own drum patterns in response to human piano playing and has basic facial features and head movements, show that the music link encourages people to spend longer with the robot than they otherwise would.

To learn more about QMUL’s work on artificial intelligence, robot interaction and digital music visit the School of Electronic Engineering and Computer Science pages of our website.

Read an edited version of Professor McOwan’s talk in the Guardian.