Professor Iwan Williams on his role in the Rosetta comet mission

The world was enraptured last month as the Rosetta mission’s Philae lander made its historic landing on comet 67P/Churyumov-Gerasimenko. QMUL’s Professor Iwan Williams had more reason than most to be interested, as he was one of a team of investigators working the CONSERT instrument that is part of the mission. Here he explains what CONSERT is trying to find out and how it took on a vital new function after the landing. 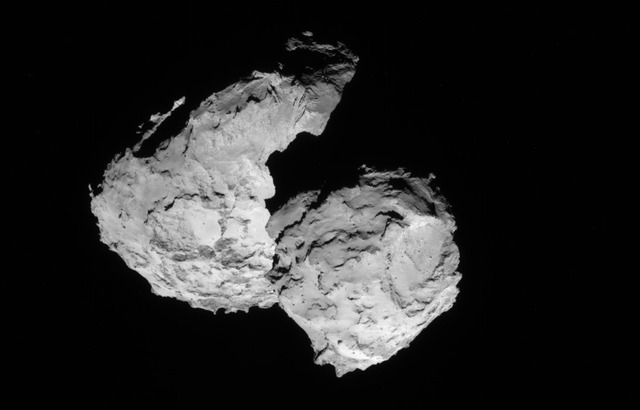 I’ve been working as a co-investigator on CONSERT under the leadership of principal investigator Wlodek Kofman, who is based at the Institut de Planétologie et d'Astrophysique de Grenoble, in Grenoble, France. I’ve been with the CONSERT project since the Rosetta mission was conceived and have been working on the science of comets since 1985.

For those who don’t know Rosetta is a European Space Agency mission that launched in 2004 with a mission to rendezvous with and study the comet 67P/Churyumov-Gerasimenko. It reached its target and went into orbit in August of this year, 10 years after taking off from French Guiana, and will orbit the comet for 17 months. Rosetta was carrying the Philae lander which completed the first ever controlled landing on a comet on 12 November and immediately began gathering and sending back data from 10 different instruments.

I’ve been working on one of those instruments for several decades. CONSERT, which stands for ‘COmet Nucleus Sounding Experiment by Radiowave Transmission’ uses extremely long wavelength radio signals to measure the composition of the inside of the comet. Much like light passing through a glass of water, when the signal from Rosetta, up in orbit, hit the surface of the comet it bends on its way through to the lander which instantaneously replies. Philae and Rosetta performed this ‘call and answer’ millions of times from all angles as Rosetta orbited around the, itself spinning, comet and measured the time it took for the signal travel through the comet each time, and how much strength of signal was lost on the way. With that information we can build up a detailed picture of the inside of the comet and what it’s made of. Once we find Philae, that is.

As we all know, despite the landing being a resounding success, it didn’t go entirely to plan and Philae bounced twice before coming to a rest. In the process it moved about a kilometre from its original landing spot and is now hidden somewhere on the surface of the comet. Unfortunately we can’t complete our calculations about the comet’s composition until we know we know exactly where it is on the surface because we need to know exactly which parts of the comet each signal went through, and it’s too large an area to just pointing a camera at the surface and look at the pictures.

Fortunately, the CONSERT team has been able to help in the process of finding out where Philae ended up. We’ve assumed that the comet is made up of the predicted mix of ice and dust and combined that with our detailed knowledge of the shape of the comet and with the data we’ve received back from Rosetta we can make a fairly good prediction. In fact we’ve narrowed the location of Philae down to a strip of the surface just 350m long and 30m wide. Rosetta will now peer at that area with its high resolution camera to find Philae. If things aren’t quite as we expected then Philae could be in a couple of other places and even if it turns out not to be in any of those places then that tells us that the comet is of a very unusual construction, which is great science in itself!

Even though Philae wasn’t active for as long as everyone hoped we still got all the data we needed so when we pinpoint Philae we can put together a complete picture of the interior of the comet. In fact we can get started now because CONSERT was up and working, sending its signals through the comet, the entire time Philae was descending to the surface and we know exactly where it was that whole time.

The mission to, and landing on, comet 67P/ Churyumov-Gerasimenko, captured the imagination of the entire world but for researchers like myself the really exciting part begins now as we start learning more about comets and potentially the early life of our own planet.

On 5 December 2014, Professor Williams hosts a seminar entitled ‘In-Situ Detection of Cometary Dust’ from Dr Simon Green of the Open University. The seminar is open to all and details can be found of the School of Physics and Astronomy website.