A conference marking 50 years since the discovery of CP violation, a tiny difference between matter and antimatter that is vital for our existence, was held at Queen Mary University of London on 10-11 July. 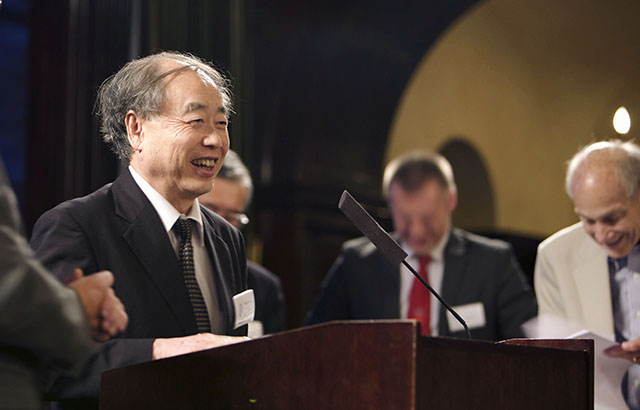 Makoto Kobayashi accepting a copy of the book

Attendees included Jim Cronin and Makoto Kobayashi, who won Nobel Prizes in Physics in 1980 and 2008, respectively. Cronin was a co-discoverer of CP violation, and Kobayashi, with his collaborator Maskawa, postulated a theory of how CP violation could be described.

Commenting on the event, Makoto Kobayashi said: "I enjoyed the conference very much. Progress in the past 50 years is amazing, but CP violation is still veiled in mystery at the fundamental level. I am looking forward to future studies."

CP violation describes the difference in how subatomic particles, called quarks, interact in relation to their corresponding antiquarks, which have similar properties but opposite charge. CP is a broken symmetry, a phenomenon that lies at the heart of understanding the evolution of the Universe and the behaviour of nature a fleeting moment after the Big Bang some 14 billion years ago. Theory states that equal amounts of matter and antimatter were created, so if CP was conserved in nature, the matter and antimatter should have destroyed each other. Luckily for us this did not happen.

“We live in a matter dominated Universe but it’s not clear how this came about,” said Dr Adrian Bevan, lead coordinator of the conference from QMUL’s School of Physics and Astronomy and researcher on CP violation.

He adds: “The Standard Model of particle physics, though the most widely accepted model to explain how the sub-atomic world functions to date, only goes so far. For example, it can’t account for gravity or the matter and energy that makes up 95% of the Universe.”

The amount of CP violation observed to date is insufficient to explain how the Universe came to be dominated by matter. Since 1999 two accelerators at SLAC in California, USA and at KEK Tsukuba, Japan have been working to produce data for two experiments, BaBar and Belle, which have been essential to study this phenomenon. Their results proved the validity of the postulated theory and led to the 2008 Nobel Prize to Kobayashi and Maskawa.

Over a thousand papers have been published so far by scientists analysing data from these two experiments, and new results continue to be produced.

More recent efforts at QMUL focus on looking at data from the ATLAS experiment at the Large Hadron Collider (LHC) at CERN. Scientists hope that when the LHC is switched back on at higher energies next year that they might find evidence for some new theory that might better explain how particles and forces interact with each other. Contender models for new physics include supersymmetry and composite Higgs models.

Dr Marcella Bona, also from QMUL’s School of Physics and Astronomy, studies CP violation as well. She explains: “The next few years will be very important for physicists in the community trying to understand the behaviour of the different types of quarks.

“When the LHC is switched on next year it will run at twice the energy than before the shutdown. We hope to get a better understanding of how different quarks behave in nature using the data collected.

“This, together with the searches for new particles and new phenomena will enable us to build a more comprehensive theory about particle behaviour and fundamental forces.”

The two-day conference at QMUL celebrated the vibrant community of researchers studying particle physics and CP violation in particular. As well as looking back over the past 50 years of progress in this field, a number of possible new avenues of research were presented.

During the event, the organisers presented the Nobel Prize winners Cronin and Kobayashi with a book summarising the progress in this field made by the BaBar and Belle experiments.

The book contains, in more than 900 pages, the comprehensive summary of results from 15 years of analysing data by BaBar and Belle physicists and it is the result of five years of effort by 172 contributors.

Reflecting on the conference, Jim Cronin said: “The recent conference at Queen Mary University London reviewed the immense progress that has been made recently and outlined a very promising future. I was greatly honoured to attend this conference and speak of the original CP discovery."