Three new planets with properties that might make them suitable for life are amongst eight new planets discovered orbiting nearby red dwarf stars by an international team of astronomers, including scientists from Queen Mary University of London. 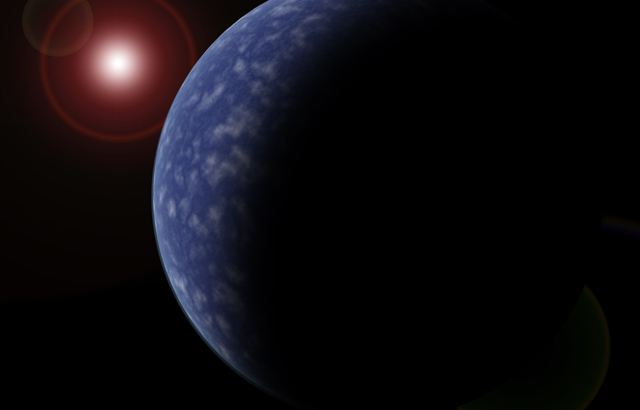 The study identifies that virtually all red dwarfs - stars with masses smaller than half the mass of the Sun - have planets orbiting them. Red dwarfs make up at least three quarters of the stars in our Galaxy.

The research also suggests that habitable-zone super-Earth planets (where liquid water could exist and make them possible candidates to support life) orbit around at least a quarter of the red dwarfs in the Sun’s own neighbourhood.

These new results have been obtained by analysing data from two high-precision planet surveys – the HARPS (High Accuracy Radial Velocity Planet Searcher) and UVES (Ultraviolet and Visual Echelle Spectrograph) – both operated by the European Southern Observatory in Chile.

By combining the data, the team was able to detect signals that were not strong enough to be seen clearly in the data from either instrument alone.

Dr Mikko Tuomi from the University of Hertfordshire’s Centre for Astrophysics Research, and lead author of the study, said: “We were looking at the data from UVES alone, and noticed some variability that could not be explained by random noise. By combining those with data from HARPS, we managed to spot this spectacular haul of planet candidates.”

“We are clearly probing a highly abundant population of low-mass planets, and can readily expect to find many more in the near future – even around the very closest stars to the Sun.”

To find evidence for the existence of these planets, the astronomers measured how much a star "wobbles" in space as it is affected by a planet's gravity. As an unseen planet orbits a distant star, the gravitational pull causes the star to move back and forth in space. This periodic wobble is detected in the star's light.

The team used novel analysis techniques in squeezing the planetary signals out of the data. In particular, they applied the Bayes’ rule of conditional probabilities to answer the question “what is the probability that a given star has planets orbiting it based on the available data?”

This approach, together with enhanced precision methods developed by Dr Guillem Anglada-Escude at Queen Mary University of London, made the detections possible.

Understanding the formation and architectures of systems with low mass planets is one of the central goals of the planetary science group led by Professor Richard Nelson at Queen Mary’s School of Physics and Astronomy.

"Obtaining orbits and masses of low-mass planets near to the Sun, brings us one step forward in the understanding of formation of planetary systems. These mass measurements are complementary to the size of planets measured by the Kepler mission on very distant stars," said Dr Anglada-Escude.

The new planets have been discovered around stars between 15 and 80 light years away and they have orbital periods between two weeks and nine years. This means they orbit their stars at distances ranging from about 0.05 to 4 times the Earth-Sun distance - 149 million kilometres (93 million miles).

These discoveries add eight new exoplanet signals to the previous total of 17 already known around such low-mass dwarfs. The paper also presents ten weaker signals for which further follow-up is necessary.

The paper is published in Monthly Notices of the Royal Astronomical Society and is available at: http://star.herts.ac.uk/~hraj/mdwarfs/mds_v4.pdf.

Artistic representation of the planets detected in the analysed dataset:
Except for those around GJ 433, the other eight planets are newly detected ones. The Sun and Mercury at its closest approach to the Sun are shown in the top panel for reference. The sizes of the planets and the stars are have been scaled up to improve visualization. The zone where an Earth-like planet could support liquid water is depicted in shady in blue. GJ 229B is a previously known Brown-dwarf companion to the GJ 229 star