Farming and wetlands: readdressing the balance

More than 50 per cent of our planet’s wetlands, from peatbogs to estuaries, both natural and man-made, are under threat from habitat destruction and climate change. 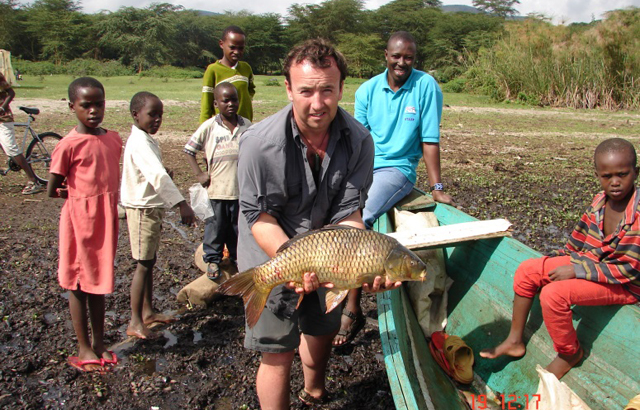 Dr Jonathan Grey, with a common carp caught by local fishermen. Despite having been introduced into Lake Naivasha only 10 years ago, carp now dominates the fishery return, and is indicative of the degraded water quality of the lake.

How we farm the land can have enormous consequences for life within wetlands, and vice versa, and there are countless examples of agricultural malpractice exacerbating the issue. So I find it odd that this year’s World Wetlands Day (organised by the Ramsar Convention) celebrates positive links with farming. One only has to look to the recent round of flooding in the UK to see the long-term damage that agricultural policy can have on these delicate ecosystems.

Dense vegetation on hillsides is key to slowing and dissipating floodwaters, but farming subsidy rules actively encourage farmers to clear their land of this natural defence barrier.

Now the government is intervening again. This time they propose river dredging to hurry the water away to the sea. But indiscriminate dredging removes all essential habitats for the animals and plants which we rely upon for a whole host of ecosystem services such as clean water, recreational fishing, and aesthetic beauty.

Flood damage is easy to quantify; ecosystem services are less so.

My group at Queen Mary has been involved with research at two Ramsar sites in Kenya for almost 15 years.

Lake Naivasha is an important freshwater lake, especially for water birds like pelicans, ibises, storks and herons. It makes the news in the UK for perceived pollution and abstraction problems caused by the flower farms, operating on an industrial scale on its shores.

Indeed, the lake ecosystem has changed markedly in recent history, from a lily bedecked jewel of clear water to a turbid unsavoury bowl - dominated by invasive non-native species such as carp and red swamp crayfish.

In an attempt to reverse this damage, farmers around the lake are encouraged to maintain part of their land closest to the water as a ‘buffer strip’, a natural barrier of native vegetation to intercept rainwater flowing off the land and to absorb its excess silts and nutrients before it enters the lake. Take up amongst farmers is not universal, so only time will tell if it will be a success.

Agricultural pressures for the use of precious freshwater (before it even enters the lake) also plague Kenya’s Lake Bogoria. This amazing saline lake was designated in August 2001 for its importance as a feeding site for huge flocks of flamingo amongst other migrant water birds.

Being full of salt, the lake has no direct use for agricultural irrigation or drinking water, so we have been trying to establish how the high salt content affects not just the flamingos but less obvious creatures such as midges.

These aquatic insects are preyed upon heavily by a plethora of birds, spiders and predatory beetles, and because they emerge from the lake en masse, they provide a regular feast in an arid catchment, which is used to prolonged famine.

If farmers intercepted all the freshwater before it entered the lake, it would become so salty that it could not sustain life, and the flamingos and other wildlife would disappear along with the associated safari tourist revenue.

Research can and must make a real difference here, and our work at these specific Ramsar sites only emphasises the need to consider wetlands as a part of the wider landscape.

We now have a fundamentally changed view of how much our planet can cope with, and recognise that changes to land use have an incremental effect on ecosystems both here and across the world.

By choosing to highlight impact of land use and farming on wetlands this year, the UN is shining a light on years of mismanagement and making that case too.

Work like that carried out here at Queen Mary must be a continued research focus for the next generation of freshwater and marine ecologists to play a part in preserving the environment for future generations.