Do you speak cow? Researchers listen in on ‘conversations’ between calves and their mothers

Researchers have been eavesdropping on ‘conversations’ between calves and their mothers — measuring the process of how cows communicate using detailed acoustic analysis for the first time. 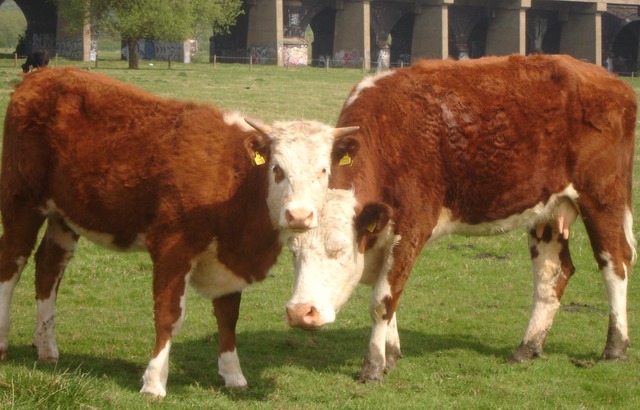 The team from The University of Nottingham and Queen Mary University of London, spent ten months studying to the ways cows communicate with their young, carefully examining acoustic indicators of identity and age.

They identified two distinct maternal ‘calls’. When cows were close to their calves, they communicated with them using low frequency calls. When they were separated - out of visual contact - their calls were louder and at a much higher frequency.

Calves called out to their mothers when they wanted to start suckling. And all three types of calls were individualised - it was possible to identify each cow and calf using its calls.

It has long been thought that cows use individualised calls to communicate with each other, but this study confirms the theory - and identifies particular types of mother-offspring contact calls in cattle.

The researchers studied two herds of free-range cattle on a farm in Radcliffe-on-Trent, Nottinghamshire. Recordings were made using highly sensitive equipment, gathering so much data it took another year to analyse.

Dr Mónica Padilla de la Torre lead the research while at The University of Nottingham’s School of Life Sciences. She said: “The research shows for the first time that mother-offspring cattle ‘calls’ are individualised - each calf and cow have a characteristic and exclusive call of their own. Acoustic analysis also reveals that certain information is conveyed within the calf calls - age, but not gender.”

Dr Alan McElligott, at Queen Mary University of London said: “This is the first time that complex cattle calls of have been analysed using the latest and best techniques. Our results provide an excellent foundation for investigating vocal indicators of cattle welfare”

By investigating vocalisations in behavioural contexts outside of mother-offspring communication, further research could reveal vocal indicators of welfare - and influence change in animal care policies.”