How different species of invasive crayfish interact with each other and affect their local environment has been uncovered for the first time by scientists at Queen Mary University of London. 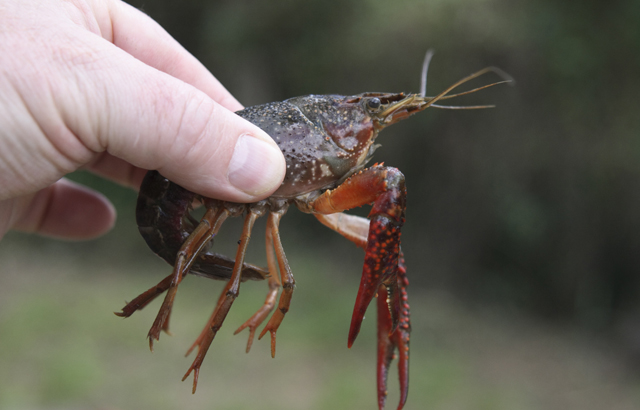 Managing the damage and impact of non-native or invasive species costs the UK nearly £2 bn per year.

The UK has seven species of crayfish with established populations – only one is a native species.

To examine how the various invasive species interact with each other, the scientists replicated the environment of crayfish species found in the Thames catchment area in 24 ponds to determine the effects on the native invertebrate community.

They also looked at how the presence of the crayfish affected ecosystem processes, such as the creation of organic matter and breakdown of waste products.

In addition, through field surveys at the ponds on Hampstead Heath and on the River Lea, the scientists determined how several species that are now co-existing in the wild actually 'fit' into the food web of the native community.

“We know that invasive species have a huge bearing on how native species inhabit the same environment - it’s no different for crayfish,” said co-author Jonathan Grey, Reader in Aquatic Biology at Queen Mary’s School of Biological and Chemical Sciences.

The researchers performed a dietary analysis by using a natural chemical signal in the species’ tissues to see what the crayfish were eating.

Co-author Michelle Jackson, who is now based at the University of Pretoria, explained: “Our experiments showed that the four crayfish species had distinct diets, which means they could coexist in the wild with few competitive interactions.”

“This variation in diet resulted in different impacts on the native invertebrate community and the breakdown of leaf litter.”

The team found many differences in the diet and behaviour of the crayfish, painting a complicated web of interactions between the species, including:

Dr Jackson commented: “With increasing rates of invasion it is important to understand how invaders interact with each other. Most studies consider single species in isolation but this is the first time we’ve considered the impact of multiple crayfish at one time.”

Dr Grey added: “We’ve demonstrated that multiple non-native crayfish species can coexist in the same habitat. Clearly they do not all have the same effects on ecosystems. Unfortunately what we have learned from 40 years of research on signal crayfish is not necessarily applicable to these more recent invaders from a management perspective.”

For more information about MSc Freshwater and Marine Ecology at Queen Mary, visit the School of Biological and Chemical Sciences website.

Niche differentiation among invasive crayfish and their impacts on ecosystem structure and functioning was published in the journal Freshwater Biology on Monday 17 February.