Gardeners wanting to rid their spring flowerbeds of pesky snails may have to ditch the beer traps and egg shells and revert to developing a strong throwing arm, according to new research co-authored by a physicist at Queen Mary University of London. 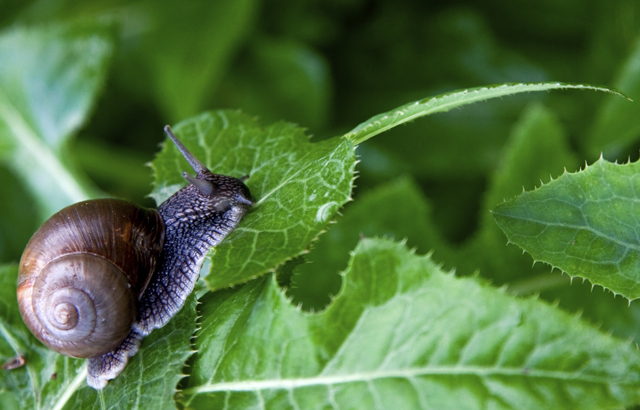 The new study published today (Friday 16 May) in the journal Physica Scripta has used statistical models to show that simply killing the snails you find in your garden offers little advantage if you want to remove them completely.

According to the researchers gardeners should revert to damage limitation, as their results proved that snails are part of larger colonies that live in the garden and come and go as they please using a homing instinct.

As opposed to simply killing a snail, throwing it over the wall is pretty effective, and the results showed that if snails are moved out of the garden by a distance of 20 meters or more, the likelihood of those particular snails finding their way back home into the garden was almost zero.

Co-author of the study Professor David Dunstan, from Queen Mary’s School of Physics and Astronomy, said: “We showed that the number of snails regularly or irregularly visiting a garden is many times greater than the number actually present at any one time in the garden.

“As such, gardeners shouldn’t be setting out to eliminate their gardens of snails. To achieve such a feat would require the gardener to rid the whole neighbourhood of snails, which would be a slow process.

“Gardeners should be setting out to minimise the damage done by snails, which our results showed could be quickly achieved by simply removing the snails over 20 meters away.

"A recent poll by the Royal Horticultural Society showed that one-in-five gardeners in the UK have thrown snails into their neighbours' gardens. Whilst our study shows that this may be more beneficial than actually killing them, we believe the gardening community would benefit as a whole by removing the snails to a convenient wasteland rather than passing the burden onto their neighbours.”

In 2010, co-author of the study Dr Dave Hodgson, from the University of Exeter, discovered along with amateur scientist Ruth Brooks that snails have a homing instinct.

Professor Dunstan’s own study began in 2001 when a small suburban garden was being refurbished. Around 120 plants were planted in the early summer and, after a few days, severe damage from snails had been observed.

Rather than kill the snails, the owners systematically removed them from the garden for six months. Each snail that was found had its shell marked and was then thrown five meters over the garden wall into wasteland. All snails that returned to the garden were given an extra mark on their shell whenever they were found.

A total of 416 snails were marked and thrown over the wall 1385 times during the study.

After collecting the results, Professor Dunstan teamed up with Dr Hodgson to statistically analyse the data from his 2001 experiment, using computer simulations to see if the real-life results could be replicated. In the computer model, each of the snails were created as objects set up with a number of different properties and behaviours and were allowed “to do their own thing”.

The researchers were able to intervene in the computer model at certain times and change different parameters. They found that they were only able to replicate the real-life results if the snails were given a homing instinct.

“A gut feeling, or even a gut certainty, that the data say something is not science. The data must be scientifically demonstrated and the only way we were able to do this was to give the snails a homing instinct,” continued Professor Dunstan.

As for the next stage of the research, co-author Dr Dave Hodgson said: “Snails reveal themselves as an abundant, amenable and enigmatic model organism for the study of animal behaviour and statistical modelling. Our plan is to develop snail behaviour studies as a fun teaching exercise for budding scientists of all ages.”