Astronomers discover ancient worlds from another galaxy next door

An international team of scientists, led by astronomers at Queen Mary University of London, report of two new planets orbiting Kapteyn’s star, one of the oldest stars found near the Sun. One of the newly-discovered planets could be ripe for life as it orbits at the right distance to the star to allow liquid water on its surface. 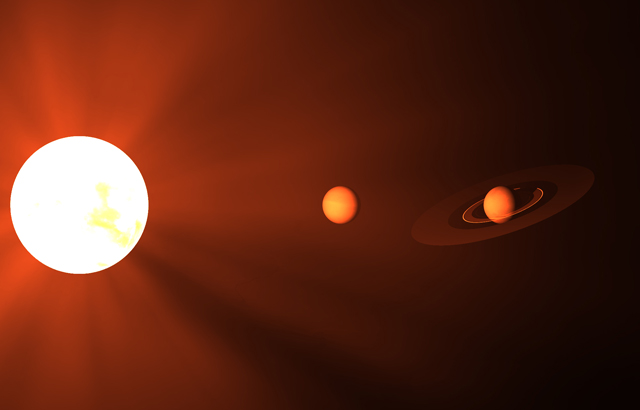 Artistic representation of a low-mass star and planets (not to scale): The red-hue colour tries to reproduce the colour of the ambient light a human might perceive on planets around such red-stars.

Discovered at the end of the 19th century and named after the Dutch astronomer who discovered it (Jacobus Kapteyn), Kapteyn’s star is the second fastest moving star in the sky and belongs to the galactic halo, an extended cloud of stars orbiting our galaxy. With a third of the mass of the sun, this red-dwarf can be seen in the southern constellation of Pictor with an amateur telescope.

The astronomers used new data from HARPS1spectrometer at the ESO's La Silla observatory in Chile to measure tiny periodic changes in the motion of the star. Using the Doppler Effect, which shifts the star’s light spectrum depending on its velocity, the scientists can work out some properties of these planets, such as their masses and periods of orbit.

“We were surprised to find planets orbiting Kapteyn’s star. Previous data showed some moderate excess of variability, so we were looking for very short period planets when the new signals showed up loud and clear,” explains lead author Dr Guillem Anglada-Escude, from QMUL’s School of Physics and Astronomy.

Based on the data collected, the planet Kapteyn b is at least five times as massive as Earth and orbits the star every 48 days. This means the planet is warm enough for liquid water to be present on its surface. The second planet, Kapteyn c is a more massive super-Earth and is quite different: its year lasts for 121 days and astronomers think it’s too cold to support liquid water.

At the moment, only a few properties of the planets are known: approximate masses, orbital periods, and distances to the star. By measuring the atmosphere of these planets with next-generation instruments, scientists will try to find out whether they can bear water.

Typical planetary systems detected by NASA's Kepler mission are hundreds of light-years away. In contrast, Kapteyn's star is the 25th nearest star to the sun and it is only 13 light years away from Earth.

What makes this discovery different however, is the peculiar story of the star. Kapteyn's star was born in a dwarf galaxy absorbed and disrupted by the early Milky Way. Such galactic disruption event put the star in its fast halo orbit. The likely remnant core of the original dwarf galaxy is omega Centauri, an enigmatic globular cluster 16, 000 light years from earth which contains hundreds of thousands of similarly old suns. This sets the most likely age of the planets at 11.5 billion years; which is 2.5 times older than Earth and 'only' 2 billion years younger than the universe itself (around 13.7 billion years).

Dr Anglada-Escude adds: “It does make you wonder what kind of life could have evolved on those planets over such a long time.”

Professor Richard Nelson, Head of the Astronomy Unit at QMUL, who didn't participate in the research, commented: "This discovery is very exciting. It suggests that many potentially habitable worlds will be found in the next years around nearby stars by ground-based and space-based observatories, such as PLATO. Until we have detected a larger number of them, the properties and possible habitability of the near-most planetary systems will remain mysterious.”

The discovery has prompted renowned science fiction writer and former astronomer, Alistair Reynolds to write a short story. Sad Kapteyn describes the arrival of a robotic interstellar probe reaching Kapteyn's planetary system, and a first exploratory survey of its planets in the far future. Read the full story.