A prequel that outshines the original: the exceptional 160-million-year-old fossils found in Inner Mongolia

A new fauna of fossil species at 160 million year old sites in China have been co-discovered by a scientist at Queen Mary University of London. 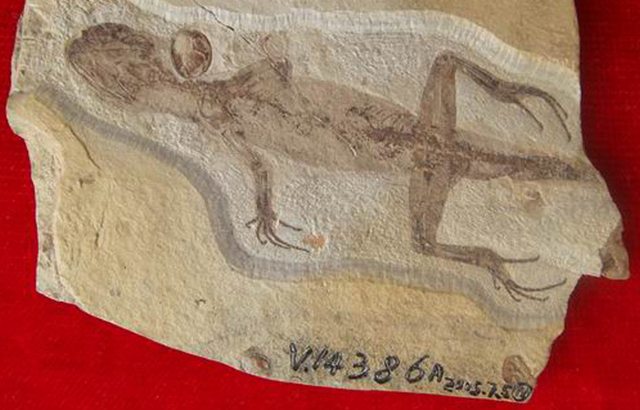 Fossil of a young lizard with skin and scale impressions preserved

Using the presence of a salamander species to connect the sites, the scientists publishing in the Journal of Vertebrate Paleontology, say the new paper represents a newly defined fossil fauna.

Over the last two decades, huge numbers of fossils have been collected from the western Liaoning Province and adjacent parts of north eastern China, including exceptionally preserved feathered dinosaurs, early birds, and mammals. Most of these specimens are from the Cretaceous Period.

However, in recent years many fossils have emerged from sites that are 30 million years earlier, from the Middle-Upper Jurassic Period, providing an exceptional window on life approximately 160 million years ago.

This fossil assemblage, newly named the Daohugou Biota after a village near one of the major localities in Inner Mongolia, China, dates from a time when many important vertebrate groups, including our own group, mammals, were undergoing evolutionary diversification.

The Daohugou Biota makes an immense contribution to our understanding of vertebrate evolution during this period, with such notable creatures as the oldest known gliding mammal, another early mammal that may have swam with a beaver-like tail, the oldest dinosaurs preserved with feathers, and a pterosaur that represents an important transitional form between two major groups.

The study shows that several of these Jurassic sites are linked together by fossils of the now extinct salamander species, Chunerpeton tianyiensis. This fossil acts as a single identifier representing a single fossil fauna and flora, containing superbly preserved specimens of a diverse group of amphibian, mammal, and reptile species.

Co-author Dr David Hone from Queen Mary’s School of Biological and Chemical Sciences, said: “The diversity seen here is impressive and important. The Daohugou has, so far, been rather less studied than the more famous Jehol group of China, and yet is already producing high numbers of superbly preserved specimens from a range of not only new species, but lineages of animals that are currently unknown elsewhere in the fossil record.”

Almost more impressive than the diversity of the biota is the preservation of many of the vertebrate specimens, including complete or nearly-complete skeletons associated with preserved soft tissues such as feathers, fur, skin or even, in some of the salamanders, external gills.

Lead author Dr Corwin Sullivan, said: "One of the most important things the Daohugou Biota reveals is that Mesozoic mammals were a lot more ecologically diverse than most palaeontologists would have guessed even a decade ago. To recover a gliding species and a swimming species from the Jurassic was unexpected, to say the least."

Dr. Paul Barrett, dinosaur researcher at the Natural History Museum, London, who was not involved with the study, commented: "Daohugou is proving to be one of the key sites for understanding the evolution of feathered dinosaurs, early mammals, and flying reptiles, due largely to the fantastic levels of preservation. Many of the fossils are stunning and offer vast amounts of information.

“The Cretaceous feathered dinosaurs of northeastern China have been astonishing palaeontologists and the public for almost two decades now, and the Daohugou Biota preserves their Jurassic counterparts in the same region. As prequels go, it's pretty exciting."