Queen Mary University of London (QML) hosted high level delegations from Iraq and Morocco this week, giving a first-hand insight into the opportunities and challenges faced in the home countries of our visitors. 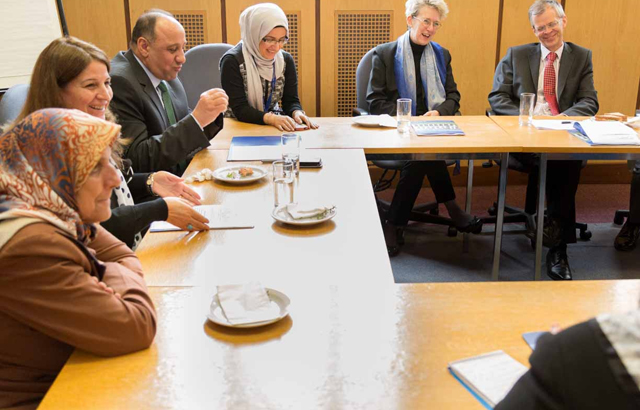 The increasing frequency of such visits reflects a growing awareness of Queen Mary’s international activities and global standing in higher education.

The Minister explained plans to radically transform Moroccan higher education by increasing capacity; elevating the importance of the English language in teaching and research; and inviting overseas universities to establish a presence in the country so that it could become an educational hub for the Sahel region.

He was impressed by Queen Mary’s status as a Russell Group institution and its top 20 position in the list of the world’s most international universities, but was particularly attracted by Queen Mary’s approach to developing transnational education, which rests on genuine partnership; an insistence on quality; and the incorporation of research into collaborations from the earliest stage possible.

Other areas of the broad ranging discussion included cross border student flows between Morocco, the UK and North Africa; the critical role of relationships between researchers in building educational partnerships; and priority research areas in Morocco, including fields of mutual interest such as ‘Big Data’ and public health.

The Principal enthusiastically accepted the invitation to explore opportunities for collaboration in teaching and research further with the active assistance of the Ministry.

Dr Daoudi was accompanied by Professor Driss Aboutajdine, the Director CRNST Morocco – the National Centre for Scientific and Technical Research and colleagues from the British Council in Morocco.  Professor Bill Spence, Vice Principal for Research and Pat Power, Deputy Director Marketing and Communications were also present.

Earlier in the week, Professor Spence had welcomed a delegation of six members of the Iraqi parliament, led by Mr Abid Theyab Jazaa, Head of the Iraqi Higher Education Committee on Monday 17 February.

The visit was part of a week- long visit to the UK organised by the British Council with the aim of seeking collaborations between the Iraqi and UK higher education sectors.

Discussions were wide ranging, covering possible areas of collaboration in undergraduate and postgraduate teaching and in research, with a particular focus on the areas of science and technology, business and marketing and medicine and dentistry all of which are priority areas for developing the Iraqi economy.

The meeting was also attended by Professor Joy Hinson, Director of the Doctoral College, Pat Power, Deputy Director of Marketing and Communications, Andrew George, Head of International Partnerships and Zainab Saleh an Iraqi student currently completing her PhD in Aerospace Engineering at QML.

Following the meeting Zainab led the delegation on a tour of the research facilities in the Whitehead laboratory in the Engineering building.