Professor Tilli Tansey of Queen Mary University of London has been recognised with an OBE in the 2014 New Year Honours list, for services to Research in the Medical Sciences and to the Public Understanding of Science. 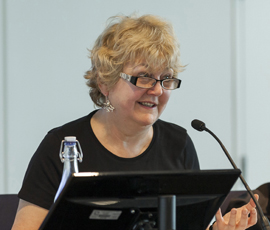 Professor Tansey completed a PhD on octopus brain chemistry before working as a research neuroscientist. In 1990 she was awarded a second PhD in medical history, and was appointed to the Wellcome Institute as a historian of modern medical sciences.

Professor Tansey has been supported by the Wellcome Trust throughout her medical history career, moving from University College London to Queen Mary in 2010 with a Senior Fellowship.

She currently heads the Wellcome Trust-funded History of Modern Biomedicine Research Group, part of the School of History at Queen Mary.

Professor Tansey’s research focuses on the history of twentieth and twenty-first century medical sciences, particularly physiology, pharmacology and the neurosciences, and the development of medical research funding and policy.

The 47th volume in the Wellcome Witnesses to Contemporary Medicine series, Drugs Affecting 5-HT Systems, was published in December 2013. Other outputs have included the video oral history project Today’s Neuroscience, Tomorrow’s History, as well as numerous books and scholarly articles.

Professor Tansey is currently working on a major project funded by a Strategic Award from the Wellcome Trust. The Makers of Modern Biomedicine records first-hand accounts of recent events in clinical genetics, the neurosciences, medical ethics, medical technology and global disease.

Alumnus and leading British obstetrician and gynaecologist Sir Marcus Setchell was also among those awarded in the New Year Honours list. In December 2012, Sir Marcus attended Catherine, Duchess of Cambridge, in her pregnancy and in July 2013 delivered her son, Prince George of Cambridge.

Queen Mary alumna Dame Colette Bowe - currently the chair of regulatory authority Ofcom - was awarded a DBE. Colette Bowe graduated with a degree in economics in 1969, returning to Queen Mary in 1973 to pursue a PhD. She was the first woman and the first Queen Mary alumna to hold the position of Chair of Queen Mary Council and in 2013 was named as one of the most powerful women in the United Kingdom by Woman's Hour on BBC Radio 4.