Amanda Vickery, Professor of Early Modern History at Queen Mary University of London, is co-presenting a major multi-part series on BBC World Service, to mark the centenary of the outbreak of the First World War. 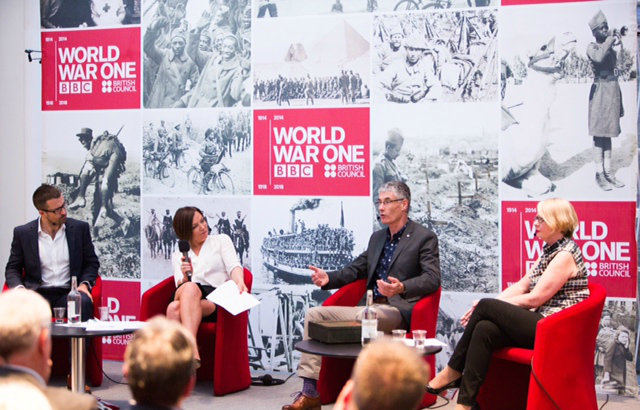 Professor Amanda Vickery with the panel

The series, a partnership between the BBC and the British Council, began in Sarajevo in June 2014 and will conclude with a debate in Jordan in June 2015. During the next year, Professor Vickery – along with her co-presenters Allan Little and Razia Iqbal – will host thematic debates from locations around the world, including Turkey, India, France, East Africa, Russia and the USA.

The most recent debate, entitled ‘the psychology of war’, was hosted at the recently re-opened Imperial War Museum in London, and was first broadcast on Saturday 2 August. The expert panel included Dr Dan Todman, World War One expert and Senior Lecturer in History at Queen Mary University of London.

The panel, which included Joanna Bourke of Birkbeck, University of London, and Michael Roper from the University of Essex, explored a range of issues including the factors which caused men to volunteer for the war, and the deep psychological trauma which awaited them in Europe’s battlefields and beyond.

Dr Todman, who sits on the academic advisory panels for the Imperial War Museum’s redesign of its 1914-18 galleries and its ‘Lives of the Great War’ citizen history project, said: “It was a privilege to take part in such a stimulating and important discussion. As a historian, and as someone with a lifelong fascination and research interest in the First World War, it is hugely gratifying to witness the level of public interest in commemorating this transformative period in our recent history.”

The programme, the third in the series, is available as a podcast on BBC iPlayer Radio.

Queen Mary University of London has already launched an exciting programme of research, teaching and public engagement related to the Great War. The series of initiatives, which opened with an international academic conference to coincide with the outbreak of the conflict, draws on the University’s considerable expertise across the humanities, science and medicine.

To learn more about the QMUL WW1 programme, visit our project microsite.