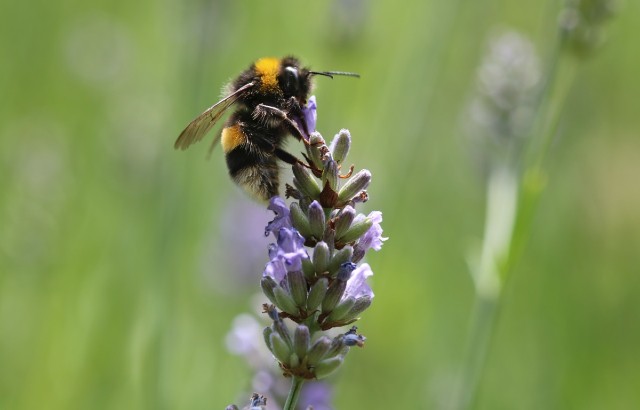 Because bees use different versions of this receptor in different tissues and across species, it may be impossible to accurately predict the impacts of insecticide exposure on bees.

Farmers use insecticides to protect plant crops from being eaten by pests. Unfortunately, although many commonly used insecticides were initially thought to be safe, they can also harm wild bees and other beneficial pollinators.

A new study by researchers from Queen Mary University of London, published in Molecular Ecology, uncovers the molecular mechanism that explains why measuring and evaluating the effects of the insecticides is so difficult using the current assessment practices.

The most commonly used insecticides, which include neonicotinoids and their potential replacements, target a neural receptor that is present in all animals. The idea that bees might have different versions of this receptor had not yet been considered in insecticide safety evaluations. Also, it was unclear to what extend bees use these receptors outside the brain.

The researchers used high-resolution molecular techniques to understand how the bodies of bumble bees and honey bees build the neural receptor targeted by insecticides. The researchers found that in different tissues, the receptor is made using different components.

There were also major differences between bees of different ages and between species. The effects on an insecticide depend on how the receptor is built. Thus, the diverse manners through which the receptors are built can explain why the insecticides have extremely diverse effects.

Discovering this much variation in how the neural receptors are assembled was surprising.

Queen Mary researcher Alicja Witwicka, lead author of the study, said: “We already knew that the insecticides can harm beneficial pollinators by affecting their behaviour, their memory, their dexterity, their immunity, and their ability to reproduce. We now also know why insecticide can harm pollinators in so many different ways."

The study's findings have serious implications for the safety assessments that are conducted before insecticides are sprayed onto crops to check if it could unintentionally harm pollinating insects. These assessments typically examine one or few measures of toxicity in one or few species and attempt to extrapolate those findings into general risks for the hundreds of other pollinator species that could be exposed.

Yannick Wurm, Professor in Evolutionary Genomics & Bioinformatics at Queen Mary, said: "Previous work showed that receptor composition affects susceptibility to the insecticides. We now found that receptor composition varies between tissues and between species. It is thus impossible to justify simple extrapolation of insecticide toxicity measures from one species or situation to another,”

He added: “Because the molecules for insecticide susceptibility vary so much within individuals and between species, policymakers should reconsider how the safety of insecticides is assessed.”

Matt Shardlow, CEO of the Buglife charity, who was not involved in the study, said: “Despite the huge negative impact on wild pollinators caused by neonicotinoid pesticides, the lessons have not been learnt and the pesticide approval processes have not been improved.  This research underlines the importance of testing the impacts of pesticides on a range of bee species and life stages, before chemicals that can cause huge damage to nature are released into the environment”.

What are the targeted receptors?

Insecticides typically aim to kill one or few pest species. But in fact, the most widely used modern insecticides target a neural receptor that is essential in all animals for the transmission of signals between neurons. These neural receptors are called nicotinic acetylcholine receptors. The new research revealed that neurons in every body part of a bee uses these receptors. This shows that all parts of a bee could be affected by insecticide exposure.

The new research also revealed unexpected variation in how the receptors are built. Each receptor is made up of five sections or subunits, and bee’s genetic blueprints include instructions for 10-15 versions of subunit. The researchers revealed that the receptors in different body parts are built using different combinations of subunits. The combination of subunits that make up a receptor fundamentally changes how it is affected by an insecticide.

The large diversity of receptors used mean that insecticide safety would need to be tested on each version of receptor. This is likely to be infeasible.

“Our work demonstrates that high-resolution molecular approaches can help us to better understand how the bodies of pollinators work, and ultimately their health,” added Alicia Witwicka.