1 in 4 Chilled Sliced Meats Sold in the UK are Saltier than Atlantic Seawater, according to new data

New research by Action on Salt from Queen Mary University of London has revealed that two-thirds of all chilled sliced meats including sliced ham, chicken, corned beef and salami sold by leading grocery retailers are dangerously high in salt – with one in three failing to meet the national salt reduction targets. 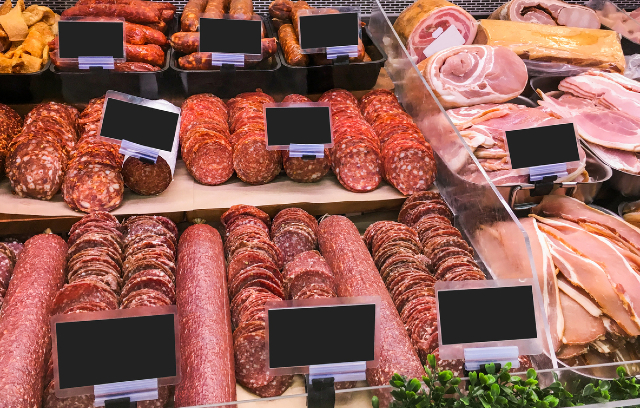 Action on Salt is now calling for mandated salt reduction targets for all products containing added salt to be enforced (and reviewed regularly) by the Government. This will ensure that all manufacturers and retailers meet both the current and future targets, creating a much-needed level playing field. Failure to comply should be penalised, say the experts.

Food companies have made appalling progress in this category of food considering the salt targets set in 2006 have not been amended (unlike other food categories) due to lack of progress.

Food manufacturers, in particular, are lagging behind, with only one in three (37 per cent) of their chilled sliced meat products achieving their respective salt targets, compared to two in three (69 per cent) of retailer’s own label products. Tesco is leading the retailers in compliance with the targets compared to Waitrose which is falling far behind (97 per cent vs 7 per cent respectively).

Of all products surveyed, the average salt content is 2.1g/100g, meaning nearly two thirds (65%) are considered high in salt and a disappointing four products considered low. The salt content varies from 0.26 – 6.0g/100g across all surveyed products – which is a whopping 23-fold difference! But there is also a clear and wide variation across each of the different types of chilled sliced meat. For example, within poultry products there is a difference of 2.24g salt between the least salty (Aldi’s Flame Grilled Chicken Slices at 0.26g/100g) and the saltiest product (Adlington Cooked Sliced Free Range British Turkey at 2.5g/100g) – which is as salty as seawater.

Whilst salt per suggested portion size (as stated on pack) averages 0.6g, due to inconsistent portion sizes (which range from 1x slice to half a packet across food companies), certain manufacturers are offering up as much as 1.73g salt per portion for ham, and 2.3g per portion for charcuterie meats. For example: M&S British Wiltshire Roast Ham contains 1.73g of salt per portion (3 slices) – that’s nearly one third (29 per cent) of an adult’s and more than half (58 per cent) of a child’s (4-6 years old) maximum recommended daily salt limit. If consumed as part of a single sandwich, then this would contribute almost half (45 per cent) of an adult’s daily salt limit.

Surprisingly, many chilled sliced meat products with the highest overall salt content are exempt from the UK’s voluntary salt targets. These were predominantly charcuterie meats (e.g. prosciutto, chorizo etc) and traditionally cured hams (e.g. Wiltshire cured ham) – all of which still vary in salt content. For example, Sainsbury's Italian Prosciutto Crudo has 5.51g of salt per 100g (more than twice the concentration of seawater), compared to Sainsbury's Taste the Difference Italian Prosciutto Di Speck, which contains 30 per cent less salt at 3.89g/100g. This demonstrates that vastly reduced levels of salt are achievable, even in the most challenging of products.

Sonia Pombo, Campaign Manager for Action on Salt, said: “Why are these everyday sliced meats, which are frequently consumed by children, so high in salt when it is clearly not required for taste or food safety? Whilst some salt may be needed in processed meat, there is scope for extensive reductions, as demonstrated by some of the more responsible companies. There’s no excuse. Other manufacturers must now follow their lead and put their customer’s health first.”

Mhairi Brown, Policy & Public Affairs Manager for Action on Salt, added: “Voluntary salt reduction targets have been a key feature of public health policy in the UK for many years. After initial success, which inspired more than 50 countries to follow suit, progress has stagnated in the UK, whereas many other countries have gone further and introduced mandated targets. If the UK industry can no longer comply with voluntary measures, then now is the time for mandatory, comprehensive salt reduction targets to ensure success and create a level playing field.”

Graham MacGregor, Professor of Cardiovascular Medicine at Queen Mary University of London, and Chairman of Action on Salt, said: “Reducing salt is the most cost-effective measure to lower blood pressure and reduce the number of people suffering from strokes and heart disease and life changing disabilities associated with this – all of which is completely avoidable. It’s a disgrace that food companies continue to fill our food with so much salt when there is the option to reformulate, which our research shows can easily be done. The Government needs to force the industry to comply, to ensure that many thousands of people don’t die unnecessarily."