The Many Contradictions and Unspoken Issues of COP27

Laleh Khalili, a Professor of International Politics at Queen Mary University of London, ethnographically observed the proceedings at COP27. She is currently researching a major project on the politics of hydrocarbons, after having won a British Academy/Leverhulme small grant to explore the subject. She is hoping to write a book about the everyday entanglements of hydrocarbons in all aspects of our lives. 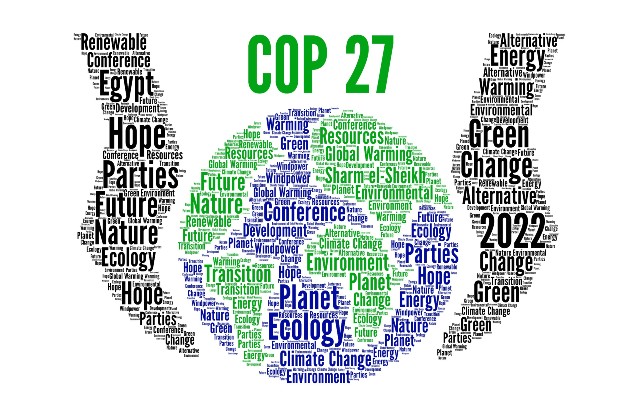 The politics that affect the agendas, shape, and outcomes of COP27 run on multiple parallel tracks - and it seems like they rarely, if ever, meet. There is the perfunctory attendance by heads of state. Rishi Sunak showed up for a day, after having said he wouldn’t bow to domestic pressure – then he did-  and probably also the influence of environmentalist King Charles. President Joe Biden stopped by for a few hours on the way to the G20 Summit in Indonesia. Brazilian President-elect Luiz Inácio Lula da Silva arrived in the second week of the conference, electrifying the pavilion where he spoke in his first appearance on the international stage, greeted by  adoring crowds and support from indigenous Brazilian activists. It is a sign of the contradictory politics of the conference that he arrived on a private jet owned by a millionaire businessman.

Much more significant than the showboating heads of state, though plagued by significant and intense disagreements, were the formal negotiations between ministers from across the world. Transnational institutions from the United Nations climate bodies to the World Bank and the International Labour Organisation to the United National Development Programme provided the rhetoric and language, but, unfortunately, often conflicting frameworks for much of the negotiations. Non-Governmental Organisations (NGOs) and civil society activists campaigning on health, gender, indigenous rights and a range of environmental subjects held side-meetings and tried to influence negotiations - formally and informally- and via the People’s Plenary, which was held on the penultimate day of the conference. A great many businesses were there too, many trying to ‘greenwash’ and dilute any radical climate initiative or trying to ‘hook up’ with the lucrative and CSR-friendly green and blue capital. Most surprisingly among them were 636 fossil fuel lobbyists and representatives from the aerospace and livestock industries.

And, of course, local politics imposed itself on the grand proceedings. Egypt as the host and presidency of COP27 had refused to accredit any domestic human rights activists, so many arrived in Sharm El-Sheikh as delegates of international human rights organisations. Among them was the sister of Alaa Abd El-Fattah, a British-Egyptian activist who has been detained without trial since 2019, after having already served five years in prison for organising protests against the military government of Abdelfattah Al-Sisi. He had been on hunger strike for more than 200 days and had stopped drinking water in the first week of the conference but was sadly force-fed during it; the Sisi government could not afford to have such a high-profile political prisoner die during the event.

The ministerial negotiations had to be extended beyond the formal endpoint of the conference, as they kept faltering over two major sticking points: an agreement for the payment of loss and damage to countries most affected by climate change, and a pledge to maintain a 1.5-degree ceiling on the increase in global temperatures. The latter was a goal of the 2016 Paris Agreement but reaching it requires slashing carbon emissions by half in a decade, and in turn curbing growth, which richer nations are reluctant to agree to.

Among the parties sabotaging the possibility of achieving 1.5 degrees are the large hydrocarbon producers - one of which, the United Arab Emirates, is ironically enough the presidency and the host of COP28. Saudi Arabia, the other major producer, failed to commit to the 1.5-degree pledge but had created a geodesic dome near the venue of COP27 and called it the Saudi Green Initiative. The various elements of the initiative – the analogues of which also appeared in the UAE pavilion on the site of the conference – were essentially measures for adapting to a world collapsing under the environmental chaos of its own making.

On Sunday morning, a lukewarm decision was reached on loss and damage, with the US and richer nations finally conceding to the demand from poorer nations to set up a fund to pay for the effects of climate-driven catastrophes. However, as the head of the World Wide Fund for Nature lamented - in the absence of a broad commitment to slowing down emissions, loss and damage could ironically be in danger of becoming a “fund for the end of the world.”