Could a wristband or certificate allow you out of lockdown after a negative coronavirus test?

Dr Magda Osman, Reader in Experimental Psychology at Queen Mary University of London has written an opinion piece for The Conversation exploring whether freedom passes based on negative test results could offer a way to avoid placing restrictions on everyone. 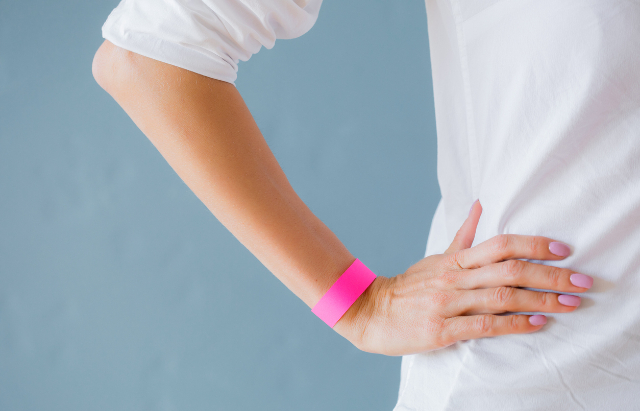 An escalation of coronavirus cases and the discovery of two new variants in the UK has led to increasing restrictions and a new national lockdown. But could freedom passes based on negative test results – in the form of wristbands or certificates – offer a way to avoid placing restrictions on everyone?

On the back of a recent mass testing regime in Slovakia in October, after a second wave of coronavirus cases, the UK’s Behavioural Insights Team (BIT) argued it could provide easy recognition of those who have tested negative.

In Slovakia, 3.6 million people were voluntarily tested (out of a population of 5.4 million) across one weekend and 38,000 new cases were identified – around 15 times the daily average identified under the country’s existing test and trace system. Slovakia used lateral flow tests, which take 15 minutes, with a reported sensitivity of 70%, meaning that three in ten positive samples go undetected. The BIT said a recent study suggested these tests picked up 50% of asymptomatic cases and apparently had apparently virtually no false positives.

Slovakia’s approach depended on providing the public with a strong incentive to get tested: the issuing of a government certificate for a negative test, and early release from a strict curfew. But what are the pitfalls of such a system – and could it be used in other countries with larger populations?

Under a voluntary mass testing scheme, people would have two options: get tested (assuming you’re not exempt) or not. If you choose to get tested, then whether or not you have symptoms the result is either positive or negative. Test positive and you would need to self-isolate with your household, test negative and you would receive the “freedom pass”.

Assuming that without a vaccine you don’t develop long-term immunity from SARS-CoV-2, you will still be at risk of contracting it multiple times, even with a freedom pass. A freedom pass, then, could only be temporary and only remain valid with regular testing.

How frequently should one get tested? If you get a notification, for example via contact tracing, that you’ve come into contact with a person who has tested positive, does this invalidate your negative status? And would this still be the case if you didn’t report any symptoms?

It may be that the costs of getting tested would be too high, especially with a voluntary scheme. And if a limited degree of freedom of movement meant having to do multiple tests, then the costs of the scheme may outweigh the benefits (both for the people being tested and for the state).

There are additional issues regarding the test system, including accuracy of the tests themselves. No test is 100% accurate, although PCR swab tests are deemed more accurate than lateral flow tests, lateral flow tests are are quicker and more likely to be used for mass testing. Not only will some people test negative when they have the virus (a false negative) but people will also test positive when they don’t (a false positive). For a false positive, people will be told to self-isolate and be denied a certificate, losing their freedom of movement – despite the fact they do not have the virus. While the BIT reported virtually no false positives for the Slovakia test, it said a validation PCR test would be needed to confirm this.

In the case of a false negative, people may be infectious and unwittingly spreading the disease. Scaled up to the kinds of numbers involved in a mass testing programme in larger populations the number of potential false positives and false negatives could be very large. For both PCR and especially lateral flow tests, the optimal system would be confirmatory testing – testing someone more than once in a session to confirm their status either way and to reduce false results. In this case, a freedom pass would involve more than one test, as well as multiple testing to keep a valid pass.

Antibody tests could be used to tell if you’ve previously had the virus. A freedom pass could be issued on the basis that you’d developed immunity and are less likely to transmit the virus – but we still don’t know how long people develop immunity for, whether for multiple variants or just one virus type. And if someone tests negative for antibodies, do you still issue a freedom pass, or ask them to take additional tests for current infection?

Given these issues, what is the added value of a freedom pass under conditions in which the tests are voluntary, carry inaccuracies – or require a more costly complex and rigorous testing regime – especially in non-lockdown situations where freedom of movement exists?

Some standardised rapid testing could arguably be used for some venues (pubs, restaurants, sporting venues, workplaces and airports, for example), but this still clearly carries accuracy risks and costs – though the public may accept this for the sake of returning to some semblance of normality.

The only other alternative is to issue freedom passes to those that have had the vaccine. But inoculating populations will be a long process and some, such as those with immune compromised conditions, may not get access to a vaccine until much later. This also assumes that we know how long of an immunity a vaccine gives, which to date we don’t. Getting vaccinated doesn’t mean you can stop taking social distancing measures and wearing mask.

Although many public and private institutions now use behavioural techniques to influence positive change, the behavioural change enterprise disproportionately focuses on promoting successes.

In a recent study my colleagues and I showed that despite their widespread use, failed interventions are surprisingly common and lead to backfiring, making the behavioural problem worse. Examples we found included menus designed to encourage vegetarian food choices that led to fewer meals being ordered by people who more regularly ate vegetarian food, and how use of smaller packaging to reduce consumption could actually lead to an increase.

Even if interventions such as a wristbands were implemented, there is a risk that overall this could result in fewer people getting tested or some walking around with the virus and some stuck at home without it. This would be classified, based on our published work, as a backfiring effect.

While I can see the motivation behind the idea and suggested behavioural interventions, the design and deployment of a similar programme in the UK requires much more consideration. As the authors of a recent article in the BMJ on mass testing wrote: “Nobody’s freedom or behaviour should be made contingent on having had a novel rapid test. It is premature to offer testing as the route to individuals’ release from restrictions.”

This opinion piece was originally published in The Conversation on 6 January 2021.