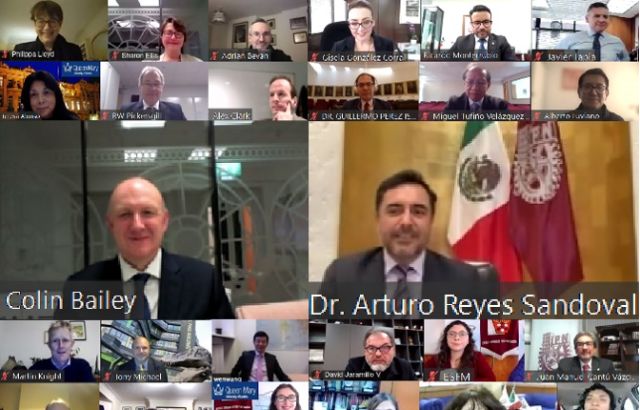 A screenshot of the workshop between Queen Mary and IPN

Opened by Professor Colin Bailey, President and Principal of Queen Mary University of London, and Dr. Arturo Reyes Sandoval, Principal of the National Polytechnic Institute (IPN) of Mexico City, the virtual event was well attended by the principal investigators of the research project and dignitaries, academics and students from both institutions.

The principal investigators from SAPIENS, Dr Adriana Lara from the Polytechnic Institute and Dr Marcella Bona from Queen Mary University of London, explained during the ceremony the highly enriching experience of participating in a pioneering, joint, multidisciplinary international research project focussed on one of the biggest present-day problems in Mexico City: air pollution. They explained the aim of the project, which brought together mathematicians, particle physicists and engineers from both institutions and outlined plans to expand and evolve the research. They finished by inviting all attendees to the week of workshops in which academics and students from both institutions will participate.

In his address, Professor Reyes highlighted the importance of the strong cooperative relationship between Queen Mary and the Institute. As a result, this international collaboration has enabled the development of research projects with real, important social impact, focusing on smart cities, with outputs of potential benefit to millions of citizens in both the United Kingdom and Mexico. Moreover, Professor Reyes highlighted the fact that these internationalisation efforts are providing a solid foundation for developing and fostering new initiatives between Queen Mary and the Institute. Finally, he praised Professor Bailey's shared internationalisation vision and commitment to consolidating and indeed, enhancing, existing and future partnerships between Queen Mary University of London and the Polytechnic Institute.

When he spoke, Professor Bailey stressed the relevance of SAPIENS as part of innovative research solutions to reduce air pollution affecting people’s health in cities across the globe. The Principal mentioned that SAPIENS is a classic example of an international collaboration and highlighted the importance of this. He spoke briefly about Queen Mary's transnational education (TNE) initiatives with China as an example of a strong international partnership.

He finished his talk by recognising the strengthening of the international partnership between Queen Mary University of London and the Polytechnic fostered not only by SAPIENS, but through several initiatives that are currently being developed, and stated that Queen Mary considers the National Polytechnic Institute a strategic partner. Both principals agreed that international partnerships and relationships are important for both institutions and furthermore for both countries and that such partnerships are strategically important in terms of economic and scientific progress for both the UK and Mexico.

The respective teams were delighted to see that by working closely together, the ongoing efforts and hard work of staff at both Queen Mary and the Institute are now starting to bear fruit. This provides a solid foundation for continued and increased cooperation and collaboration between Queen Mary and National Polytechnic Institute on a range of initiatives that will be highly beneficial to both institutions.