Political developments in France offer sharp lessons for the rest of Europe, according to new research

A new book authored by an academic from Queen Mary University of London offers fresh insights into politics and society in France, providing a critique of French leadership in the run-up to the forthcoming presidential elections. 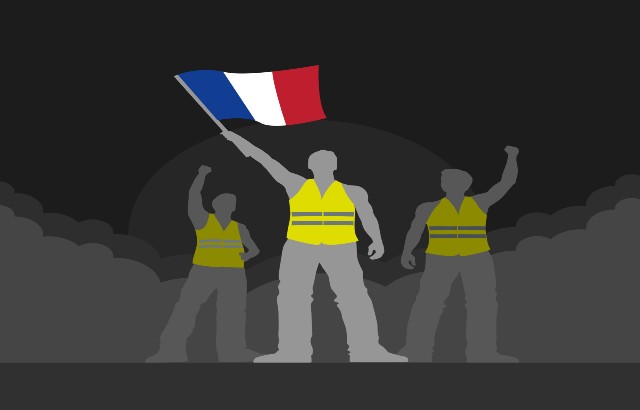 The yellow vest (gilets jaunes) movement began in France in 2018

Professor Brigitte Granville offers a unique insight into the state of the French nation in her new book, What Ails France?

While France has experienced many of the challenges experienced by other advanced industrial democracies in the face of globalisation, technology and mass immigration, there have been specific difficulties in the French context.

The book makes the case that the failure in France to deal effectively with those widely shared challenges, and the resulting public discontent, are the result of the centralised rule of an entitled and intellectually parochial oligarchy. This establishment is buttressed by an ‘intelligentsia’ that has abandoned the typically radical values of their youth. As the horrors of the twentieth century receded and the West won the Cold War, much of the intelligentsia became conformist. Professor Granville points to the recent yellow vests (gilets jaunes) movement, which began in 2018 as evidence of this; the leadership in France were more disturbed by the disorder of the protests than prompted to address the grievances that caused them.

No place for silence or indifference

Professor Granville argues in her book that those who sympathise with the grievances of the gilets jaunes movement are routinely denounced as populists, battling against a proven formula for prosperity. According to the work, political leaders have stifled free debate, and discussions in the media became a sham, where only approved ideas were included. She highlights the dangers of ignoring the roots of widespread public anger and despair.

Professor Brigitte Granville, Professor of International Economics and Economic Policy at Queen Mary’s School of Business and Management said: “My aim in writing this book is to make whatever contribution I can to breaking that silence, which I see as a precondition for freeing up the search for ways to escape stagnation and hopelessness.”

Professor Granville also argues that French society has been, to a certain extent ghettoised, both spatially and intellectually. “There is spatial ghettoisation in terms of the populations of invisible people confined to the suburbs and peripheral districts, and intellectually in terms of praising those with ‘correct’ ideas and consigning those with ‘incorrect’ notions to the disreputable margins, where they are considered to be deluded or deplorable,” she said.

Against monetary union, but pro-European

The research also sheds new light on current debates concerning European unity, particularly in the wake of Brexit. Whilst she is a self-confessed pro-European, Professor Granville, in her wider research, and in this latest book, argues that monetary union has been bad for the single market and the broader European cause. As she put it in a recent podcast with The Know Show, Italy should leave the Eurozone.: “For countries to have the same currency their economies need to be in sync, and in particular competitiveness needs to converge […]. A single interest rate will be too high for some countries but too low for others […] Where there is a shock, in a situation with a high budget and/or balance of payments deficits, monetary union is not really there to bail you out,” she said.

With just a year to go before the next national elections in France, it remains to be seen what future vision for the country will resonate with voters.