Professor Stephen Duffy, Professor of Cancer Screening at the Wolfson Institute of Preventive Medicine, and Professor John Field, from the University of Liverpool’s Department of Molecular and Clinical Cancer Medicine, comment on recently published results from a lung cancer screening trial. 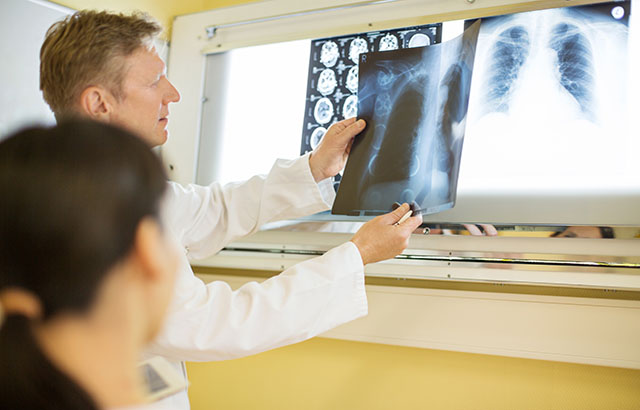 Professor Stephen Duffy, Professor of Cancer Screening at the Wolfson Institute of Preventive Medicine, and Professor John Field, from the University of Liverpool’s Department of Molecular and Clinical Cancer Medicine, comment on recently published results from a lung cancer screening trial.

Currently, lung cancer kills more people than any other cancer in Europe and the five-year outcome is poor for late stage disease. However, we now have unequivocal evidence as to how to control its impact in our society.

The recent publication of the NELSON lung cancer screening trial in the New England Journal of Medicine, provides policy makers with irrefutable evidence of the mortality benefit of Computed Tomography (CT) screening, a special type of X-ray procedure, for lung cancer. The results of the trial are likely to add to the drive to implement CT screening in the UK and in Europe.

NELSON is the only adequately powered lung cancer screening trial, other than the US National Lung Screening Trial. The trial recruited 15,789 subjects, which were randomised to periodic low dose CT screening or to a no-screen arm.  The former group showed a significant reduction (24 per cent) in mortality from lung cancer in male participants. This translates to around 60 lung cancer deaths prevented as a result of four offered rounds of screening in 7,900 subjects.

Lung cancer screening in the UK and beyond

We have known for some time that if you can identify early stage lung disease in high risk individuals using CT screening, and they are treated successfully, usually by surgical intervention, these individuals have a very good five-year prognosis.

The UK pilot lung cancer screening trial (UKLS) has demonstrated that a high percentage of early stage disease (67 per cent) were identified, of which over 80 per cent were suitable for surgery. A number of extremely important lessons were learnt from the UKLS, which included: minimal psychological impact on the participants; successful integrated smoking cessation and the intervention was estimated to be cost effective.

The immediate impact of the UKLS trial was taken up by Liverpool CCG, with the Liverpool Healthy Lung Programme, followed by major implementation and evaluation projects in Manchester, Yorkshire and London. Most recently NHS England have made a major investment into the ‘Targeted Screening for Lung Cancer with Low Radiation Dose Computed Tomography’, which provides support for 10 new early detection sites. We could say, therefore, that the UK is leading the implementation of lung cancer screening in Europe, but we have to be aware that these remain local projects and a policy decision is awaited on the issue of a National Lung Cancer Screening Programme. The NELSON results provide valuable information for such a decision. Furthermore, the impact of the NELSON trial will be considered beyond Europe, especially in Asia, where there is already major interest in lung cancer screening.

Benefits in women as well as men

Even though the NELSON trial mainly focused on men, the trial included a small sample of women, which provided an interesting observation of a greater relative benefit in women than in men.  The trial demonstrated a non-significant 33% reduction in lung cancer mortality in females, at 10 years follow-up bearing out results observed in NLST and elsewhere to a lesser degree.  The reason for this finding is currently unclear, however, it may relate to lesser comorbidity in women.  There is a need for further examination of the other European trial results, to ascertain if this is a general phenomenon, and more importantly, understand why it occurs.

In any screening setting, one has to examine the harms and benefits and if patients are undergoing unnecessary extra examinations or treatment. In lung cancer, this relates to the numbers of screened subjects undergoing further investigation. Results in the past have indicated that around 20 per cent of people screened require at least an additional scan to check for growth or regression. In NELSON, this was only observed at the first screen, with proportions of 1.9-6.7 per cent at subsequent screens, and an average over all four screens of less than 10 per cent. This was achieved by using a very effective strategy of classifying the risk posed by abnormalities found on CT screening. This strategy used the volume and rates of growth in volume of the abnormality, rather than older studies which relied only on the diameter.

The success of the NELSON lung nodule management system has resulted in it being advocated in the European Position Statement on Lung Cancer Screening. This will improve the acceptability of CT screening, as the rate of recall for further investigation has been a major concern.

This conversation needs to be taken forward in the UK with the health service policy makers, taking account of the potential number of lives saved through screening and identifying the high-risk individuals with validated prediction tools.

There is an urgent need to identify the target risk population in which the screening will be acceptable and cost-effective.