Dr Doreen Montag is Lecturer in Global Public Health at Queen Mary University of London, and has almost 20 years of experience among indigenous and non-indigenous people in rural and urban areas of the Peruvian Andes and Amazon. In this article, originally published in Spanish on Lamula, she discusses the immense challenges faced by indigenous communities in the Peruvian Amazon in tackling the COVID-19 pandemic.

Analyst John Burn-Murdoch of the Financial Times calculates that excess deaths will be 81 per cent for Peru, potentially placing Peru as one of the countries most affected by the COVID-19 pandemic at the global level.

And it is the Amazonian regions of Peru which are most at risk. COVID-19 is just one of several new pathogens that have affected the Amazon, and in particular, its indigenous peoples, during the last few centuries. In the first month, the pandemic impacted the Loreto region the most, which had already suffered one of the strongest dengue epidemics at the beginning of the year. Now, it has been gaining strength in the Ucayali region, which demonstrates the enormous deficiencies of the health system for the region.

In recent weeks, Ucayali has become a growing and concerning focus of COVID-19 in the country, with 2,478 diagnosed cases, 103 deceased with confirmed Coronavirus, and 646 suspected COVID-19-related deaths, according to a recent report. The fatality rate for COVID-19 in Ucayali is 4.2 per cent, taking confirmed COVID-19-related deaths into account. But if we take all of the confirmed deaths into account (confirmed and suspected), the mortality rate would be 22.9 per cent.

However, there are clear disparities in how COVID-19 is affecting ethnic groups in the region. According to the report, there would be 41 cases among the Shipibo-Konibo peoples, and one case among the Yine peoples. And deaths in the indigenous communities are not reported officially, even though 53 Shipibo-Konibo people and three members of the Huni Kuin ethnic group have died in the region within recent weeks, according to the information from the Indigenous Communicators Network.

Ucayali has not received the same media coverage as its neighbouring regions despite its high level of infections and the extensive deficiencies in its health system, including oxygen plants that are yet to be put into operation. Sick people, with and without confirmed diagnosis, are therefore being treated in their homes by relatives who are then also exposed to the risk of infection.

Shortage of supplies and high prices

According to regulations of the Ministry of Health, moderate or severe cases should be treated in hospitals. In practice, however, calls are not answered in a timely manner and the population does not trust hospital treatments due to the continuous shortage of supplies and personnel – in addition to the long history of discrimination and mistreatment of indigenous peoples.

The new COVID-19 treatment centres seen in Ucayali’s major city Pucallpa could offer an alternative. However, chronic mistrust has made the population look for their own solution for this new disease. In relatively mild cases, such as those with fever and cough, families resort to medicinal plants and look for paracetamol, prices of which have rocketed. And an indigenous youth group has formed the ‘Comando Matico’, which distributes and teaches residents of Pucallpa about the use of plants. 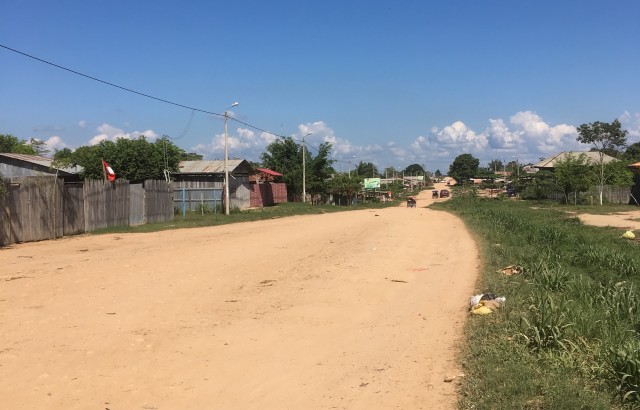 A village in Ucayali

When patients present severe symptoms with serious respiratory failure, families who have oxygen tanks at home need to recharge them, sometimes waiting for days. However, the majority of homes do not have oxygen tanks, as the market price has increased six-fold.

Amid the regional pandemic, and in the face of high prices and shortage of basic medications for the treatment of COVID-19, there are emerging initiatives such as those by fellow nursing colleagues, Cristina Juro and Karla Sueldo. They organised a collection of medicines and funds to buy medications in bulk and manage a stock of medications for fellow nurses who become infected. This way, they can access medicines at fair prices and receive timely treatment, avoiding subsequent complications and thus reducing the need for hospitalisations that could further exacerbate the crisis in the health sector.

Ensuring the universal right to health

Recognising that the central and regional government is working to improve response capacities to COVID-19, as well as recognising that receiving necessary medicine is a human right, we believe that  timely, priority, and guaranteed access to oxygen for the care of patients with COVID-19 should be ensured through distinct mechanisms and strategies.  Likewise, it is necessary to ensure access to a fair price for generic drugs through pharmacies, both public and private. The effective implementation of the universal right to health in times of a pandemic, within the context of insufficient hospital capacities and titanic efforts of family members, makes it imperative that the State and regional government guarantees the right to generic drugs and the availability of oxygen for all patients with COVID-19.

Just as we defend access to medicines and oxygen at fair, affordable, and controlled prices for the context of urban Ucayalino, we propose to work concurrently on an urgent strategy for communities located far away from cities, along rivers, and in border zones. It is important to keep in mind that there are no pharmacies in many of these places; for example, the Province of Purús only has a simple pharmacy. Therefore, it is important that the regional government, through its corresponding health networks, send medical and oxygen supplies as soon as possible.

It should also be ensured that each of these towns has its own oxygen plant so that recharging oxygen tanks remains timely and the lives of so many human beings are not risked.

Lastly, although there is a planned approach for the pandemic prepared by the Regional Management for the Development of Indigenous Peoples, managed by indigenous organisations,  the plan still lacks a budget. The people of Ucayali cannot wait any longer and the time to act is now.