Dr Sydney Calkin, Leverhulme Early Career Fellow and Lecturer in Human Geography, has written an opinion piece for The Conversation in response to a new law relating to access to abortion in Poland. 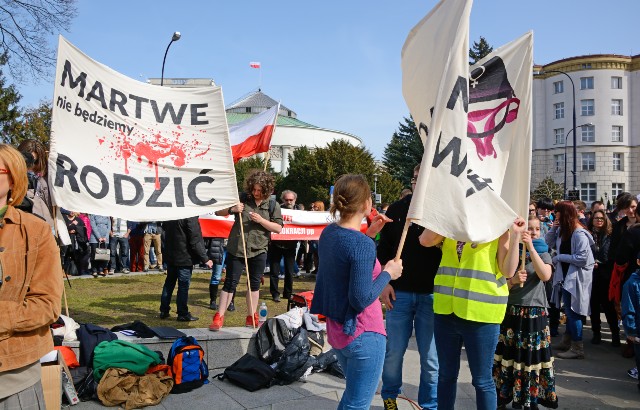 People protesting against stricter abortion laws in front of the Polish parliament.

Enormous protests are taking place across Poland in response to a new ruling striking down part of the 1993 abortion law – something that effectively amounts to a legal ban in a country that already took a very restrictive approach to abortion.

Over the last three years as part of my research on medication abortion and changing patterns of abortion access, I’ve interviewed many pro-choice activists inside Poland and in the countries where Polish abortion-seekers travel. What they’ve told me reveals the dark realities of abortion in Poland today as well as the mobilised and energetic cross-border networks of activists who are prepared to fight back.

This court ruling removes the grounds upon which the vast majority of abortions take place in Poland. In 2017, Polish government data reported that 1,035 of the 1,057 abortions (97.9%) that took place were on the grounds of severe foetal anomaly. The proportion of abortions carried out on this ground has steadily increased every year since 1994: while abortions to preserve life or health accounted for 88.1% of all legal abortions in 1994, by 2017 they had fallen to 2.1%.

Obtaining a legal abortion in Poland already took weeks or months because of administrative barriers and opposition from obstructive doctors, and these delays will be exacerbated by the new ruling.

In some regions of eastern Poland, it is effectively impossible to obtain an abortion because all medical facilities have declared themselves conscientious objectors to abortion. In other regions, legal advocates report that anti-abortion doctors deliberately delay patients, mislead them about their legal entitlement to abortion, or tell them that such procedures are not available in their region.

Pro-choice lawyers advise patients on how to prepare for such doctors, even suggesting they obtain stamped proof that hospitals have received their abortion requests. Otherwise, these documents can “disappear” and hospitals can claim that they received – and refused – no requests for abortion.

The process of obtaining a legal abortion can be so exhausting that lawyers find that Polish abortion-seekers who are refused by hospitals often choose not to take up legal proceedings. Instead, many travel abroad, search for a clandestine provider inside Poland, or continue their pregnancy.

Poland’s restrictive abortion laws, like all such laws, do not reduce the demand for abortion, nor do they reduce the number of abortions overall. In fact, the Polish laws serve to create a huge demand for self-managed abortion with pills and abortion travel to other countries.

There is an enormous gulf between abortions that take place in the formal medical sector – approved by doctors, carried out in hospitals – and the large number of clandestine or informal abortions that take place in Poland. Even recognising these clandestine abortion is politically contested: while the UN estimates between 80,000 and 180,000 abortions per year, the Polish government claims this number is fewer than 10,000.

Abortions that take place in clandestine settings are not technically illegal because Polish law does not make it a crime to end your own pregnancy. But it does make it a crime for anyone – doctor, spouse, friend, parent – to help another person end a pregnancy, including by helping them to travel abroad for abortion.

By pill or plane

The medical “underground” still exists in Poland, where doctors provide abortions for cash inside private clinics or home offices, but doctors providing this kind of abortion are fewer each year. The activists who support self-managed abortion in Poland are actually glad about this because they report that these doctors tend to charge very high fees and use outdated surgical abortion methods. Today, many Polish women turn to international organisations like Women Help Womenand Women on Web, both based in the Netherlands, who have supplied abortion pills there for a decade.

Self-managed abortion with pills is transformational for abortion access in Poland. But because the pills can only be used safely in outpatient settings in the first trimester, access to pills is not a replacement for safe, legal and local care: self-managed abortion is not suitable for later abortions when medical risks increase. People who need to end pregnancies with severe anomalies will now be forced to travel abroad, mainly to England and the Netherlands, where abortion care is available to 24 and 22 weeks respectively.

The activist coalition Abortion Without Borders, launched last year, helps people in Poland to obtain abortion in several countries, directing them to different member groups depending on their gestation, medical circumstances, and ability to travel. Across Poland today, protesters are painting the phone number for Abortion Without Borders on walls and even churches.

Poland’s courts have struck down a fundamental plank of its abortion law. This will not reduce the demand for abortion in Poland nor will it deter women from taking clandestine steps to obtain it. Restrictive abortion laws simply increase the proportion of abortions that take place in secret and unsafe conditions.

This opinion piece was originally published in The Conversation on 26 October 2020.