A major new project led by Queen Mary University of London is transforming the way historians can view the past. Tudor Networks of Power is an innovative project funded by the Arts and Humanities Research Council (AHRC). It is the first of its kind to analyse and visualise communication networks from Tudor times.

This vintage illustration depicts King Henry VIII standing with his members of his court.

Tudor Networks works in a similar way to platforms such as Google Maps. It offers to possibility for users to view almost 100 years of history from a macro perspective. Just like Google Maps might reveal streets that had never been mapped before, this platform reveals hidden histories and network connections that were previously unknown.

The platform allows users to zoom in and out of correspondence, jump from one point in history to the next, move from a view of thousands letters to the itineraries of a specific person, and to view the networked connections of people through time, and to read various letters related to this.

The data visualisation website of the project maps over 120,000 letters pertaining to the Tudor government, which are part of the State Papers, many of which are held by the National Archives. The collection includes political missives, foreign intelligence reports from diplomats and spies, as well as correspondence intercepted through the practices of espionage.

Shedding new light on the past

The work provides new ways to understand and discover the networks of individuals. At a time when government communications are under scrutiny like never before, and when discourses of the surveillance state are commonplace, this project, which encompasses both science and history, sheds new light on one of the formative periods in Britain’s constitutional history.

Professor Ruth Ahnert, Professor of Literary History at Queen Mary University of London, who led the project said: "The visualisation lets people see how the Tudor government positioned itself on the international stage: how it gathered information, and where it had eyes.

"By looking at the network of letters from the secretaries of state, we can quickly grasp from whom and from where their intelligence reports came. We can see the huge reach of the Elizabethan Secretary of State, Francis Walsingham’s spy network, with dense coverage in key locations of interest.

"This work also allows us to reconstruct for the first time the itineraries of people by the time-ordered letters they sent from different locations. We can see the huge amount of travel undertaken by diplomats, military leaders, merchants, and other agents and spies. We can also tell who was in the same place at the same time, and start to see intersections at unexpected places at the same moment in time – which points us to key events.

"We see, for example, multiple people converging on small  towns and villages across the continent during skirmishes and battles. Through these intersections, we can amass multiple perspectives on single historic events. For example, why is the diplomat Henry Cobham and some virtually unknown figure called Oliver King both writing from Saint-Jean-de-Luz at the beginning of 1571? There are layers of intrigue here. Both men are reporting to the Tudor government about the mercenary Thomas Stukeley, but it emerges that Oliver King is what we might call a soldier of fortune, who had tried to offer his service to the Spanish King, before being reported to the Spanish Inquisition by Stukeley, and then sought to save himself by offering information to the Tudor government." 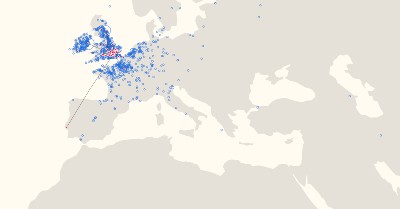 Algorithms to uncover patterns of communication

The visual representation shows the lines of communication as well as the volume correspondence and allows users to dive into the meta-data of each item showing details of the sender, recipient and date, and descriptions of the letter contents. Users can browse these letters, and map the social network implicated in the correspondence, directing attention to significant people and documents which may warrant closer inspection.

The broader project of which this is a part also uses powerful data science algorithms to uncover patterns of communication and analyse the contents of the letters in order to better understand the history of the period, which has been reported in academic and related articles. These publications delve into the network of spies and how these networks evolved over time.

Professor Ruth Ahnert added: "It has been such an exciting experience collaborating with a designer like Kim Albrecht. He took data that I had meticulously prepared for analysis over several years, and visualised it in ways that allowed us to grasp in an instant habits of communication that it would have previously taken extensive study to understand. We are also extremely grateful to Gale Cengage for sharing the data with us, and allowing us to share the outputs in this way". 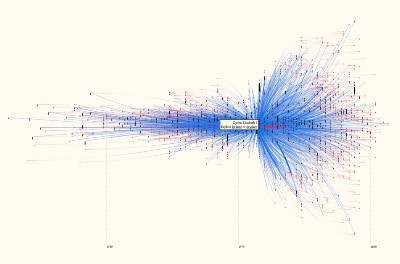 Bringing together science and history

Dr Sebastian Ahnert, Lecturer at the University of Cambridge said: "This interdisciplinary project brings together history, data science, and design, and it has been a fantastic experience to see these parts come together. We hope that our project might inspire future interdisciplinary collaborations of this kind."

Kim Albrecht, Visualisation Designer on the project said: "The project is a reflection of the past onto the present and the future. Today’s surveillance state is not a concept of the 21st century. The rise of the internet, social media, the National Security Agency, or MI6 show that this is something embedded in all forms of media distributions over the last hundred or even thousand years.

"Ruth and Sebastian Ahnert and their entire team of researchers did a magnificent job in turning historical correspondence into contemporary database structures and, through that, into visualisations of time, space and network structures.

"I am confident there are hidden, unknown stories in here. But the big story is the entirety of the project. Google Maps allowed people across the globe, for the first time, to zoom out from the street that they are living on. This project achieves something similar but not through geographic location but history."